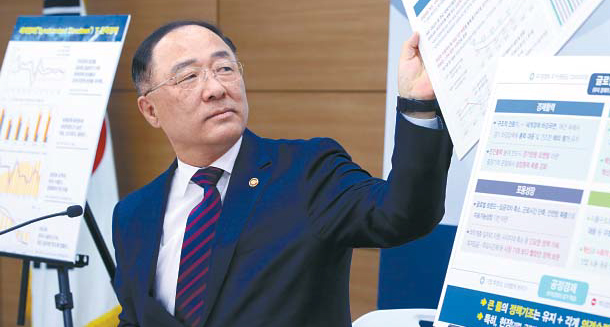 “Through an expansionary fiscal [policy], deficits may become larger in the short term,” said Hong, who is also deputy prime minister for the economy, during a press briefing at the Government Complex in Sejong on Monday. “However, we need to respond with an active fiscal policy against downward risks to the economy.”

Korea faces a slowdown, and economic growth this year is expected to fall far short of the government’s target of at least 2.4 percent. Hong has previously vowed at least 2 percent growth, while global credit rating agency S&P forecasts growth at 1.8 percent.

Headwinds such as exports recording on-year declines since last December and inflation remaining below 1 percent throughout this year have taken their toll on the economy.

“We face an immediate task to come up with momentum for a rebound to the economy,” explained Hong. “We will find new projects to reinvigorate the economy in order to reach growth next year beyond the forecasts by major institutions.”

The International Monetary Fund expects 2.2 percent growth for Korea next year, while the Organisation for Economic Cooperation and Development forecasts growth at 2.3 percent.

The Finance Minister argued the importance of the government’s proposed record-high 513.5 trillion won ($440.6 billion) budget for next year.

All the spending has raised concerns about rising debt.

The budget is expected to raise the country’s debt-to-GDP ratio to 39.8 percent next year from this year’s 37.1 percent.

“Deficit-covering bonds will increase by 26.4 trillion won next year, however, this is within our fiscal space,” said Hong, defending the spending plans.

The recent trend of slowing tax collections has compounded concerns.

The budget deficit as of September this year reached 26.5 trillion won, a record for the period. The government ran a budget surplus of 14 trillion won during the same period a year earlier.

Hong assuaged such worries, explaining that the deficit was in part caused by early spending.

“By the end of the year, we expect tax intakes to fall a little short of expectations, however, it will not greatly diverge [from expectations].”

The Finance Ministry actually expects a fiscal surplus of 1 trillion won this year.

Hong admitted that the country should be wary of the pace of rising debt, while arguing that Korea maintains relatively good fiscal health, citing the average debt-to-GDP ratio of the OECD, which is 110.5 percent.

Korea’s ratio is expected to rise to 46.4 percent in 2023 after the expansionary fiscal spending.

Hong vowed to continue spending in the short term, adding that the government will reassess its options if debt keeps piling on.

“Considering the current response to the economy, we will likely reach around the mid-40 percent level [for the ratio],” explained Hong. “If debt continues to rise afterwards, I think there should be stricter control then.”

He also acknowledged Korea’s sluggish economic growth at the briefing, which was organized to mark the halfway point of the Moon Jae-in administration.

“The most disappointing point is […] economic growth that has hovered lower than what we have promised to the public,” said Hong.