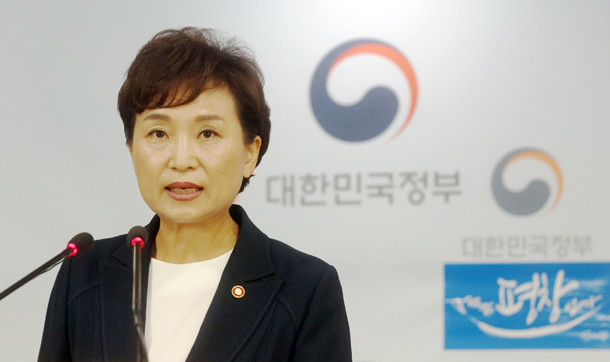 Minister of Land, Infrastructure and Transport Kim Hyun-mee announces a package of tough measures to curb speculation and stabilize the hot real estate market at the government complex building in central Seoul on Aug. 2. [YONHAP]

People talk about someone having made money from real estate or stocks. Stories of this kind go around like a virus and become contagious. As asset prices go up further, those not yet participating in the market feel a deeper sense of relative deprivation. When people irrationally jump in, the market becomes overheated and prices surge.

This is what Nobel Prize-winning economist and Yale University professor Robert Shiller called the “contagion of ideas.” He explained that the mechanism of mass psychology fans asset bubbles. He called the mob psychology the “zeitgeist.”

The real estate market in Korea seems to have caught the “contagion of ideas.” In Gangnam, southern Seoul, a house costs 100 million won ($85,837) per pyeong (36 square feet). During the two years and six months of the Moon Jae-in administration, the median sale price of an apartment in Seoul rose by 44 percent. After 27 neighborhoods in Seoul were designated as areas where a sales price ceiling will be applied for private housing on Nov. 6, money flowed.

What encourages the contagion of ideas and reinforces the zeitgeist of “real estate never loses” is ironically the Moon Jae-in administration, which has been waging a war on real estate. While it has churned out 17 real estate policies so far, they actually resulted in the opposite effect. It is the irony of regulation that ignores the basic economic theory of supply and demand.

After facing the boomerang effect of its real estate policies, the government may need to pay heed to what Robert Shiller claimed in his book “Irrational Exuberance.” He said that government policies to intervene in the market by closing or limiting the market are sometimes effective, but are not valid as solutions and that the policies should be in a form of giving people chances to invest in bigger and freer markets and encouraging freer transactions.