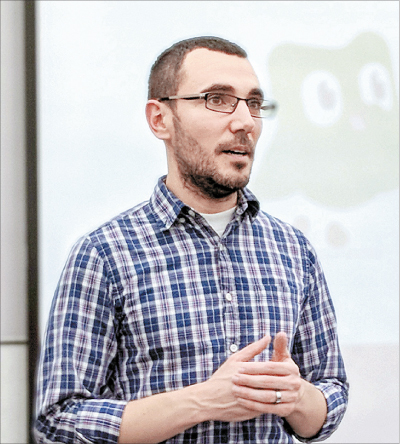 Duolingo says it is serious about Korea, though for Koreans using the language app, they have to understand English or Chinese first to study anything but English.

Pittsburgh-based Duolingo, which was started by Luis von Ahn and Severin Hacker in 2012, already supports 37 languages. It has more than 300 million downloads. Its business model is largely based on ads and a paid service for users who want to remove the ads. The company was valued at $700 million two years ago.

“Korea is a very exciting market for Duolingo,” said Jorge Mazal, vice president of product at Duolingo, at a press event held in southern Seoul on Monday.

“The Korean market for us is smaller than other markets but fast growing. It is strategically important in that we want to make sure that we support that growth and serve the users. Korea is obviously a major economy in the world, and we feel there’s a big opportunity here,” Mazal added.

Internal data from Duolingo shows people in Korea are very committed to learning languages, and they are very disciplined and consistent in using the product, according to Mazal.

Duolingo is different from other education apps in that it makes language education free, fun and accessible for everyone in the world, argues Mazal.

Duolingo has adopted a “gamified” method to learning by allowing users to level up or giving out virtual currency that they can spend in a virtual shop.

Users can also compete against friends. The intention is to get people engaged in the game without getting distracted.

That’s why Duolingo considers anything that distracts people as its competitors, instead of other language education apps, according to Mazal.

“What would I do in my free time if I didn’t have Duolingo?” This is the question Duolingo hopes people will ask themselves.

Despite its announcement to expand the Korean market, the company has not made a significant investment in the country.

Currently, Korean users can only learn non-English languages via English. Mazal said Duolingo doesn’t yet have specific plans as to when it will support non-English-language learning via Korean.

It also doesn’t have an office in Korea and doesn’t have plans to expand from the current offices in the United States and China.