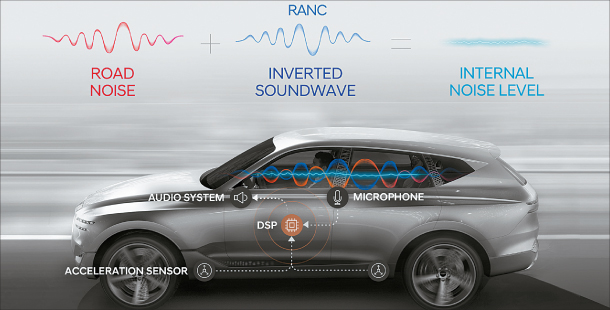 Hyundai Motor has developed a noise-cancelling feature for cars.

The Road Noise Active Noise Control (RANC) system will be available in new Genesis models expected to be released later this year, the automaker said Monday.

RANC analyzes outside sound in real time and produces offsetting waves to make the inside of a car quieter, the largest automaker by sales in Korea said.

It utilizes a digital signal processor to generate offsetting sound waves through the audio system based on readings taken of noise levels in the vehicle. Effectiveness is monitored in real time so that the system can learn and improve its performance.

RANC can cut noise levels inside a vehicle by half, which is enough for anyone to feel the improvement immediately, Hyundai Motor said.

The automaker also said RANC is also better than the commonly used Active Noise Control (ANC), as ANC technology can only block a certain range of sound waves and isn’t smart enough to predict when and what kind of road noise will occur.

RANC can increase fuel efficiency compared to traditional noise-cutting methods, like expanded soundproof materials and dynamic dampers, in that it weighs less.

It takes normal road noise 0.0009 seconds to reach the interior of a car, which has prevented ANC systems from blocking the unwanted sounds in time, but the RANC system takes only 0.0002 seconds to analyze road noise and produce offsetting sound waves.

The automaker added that it has applied for a patent for the RANC system, which took 6 years to develop, in Korea and the United States.