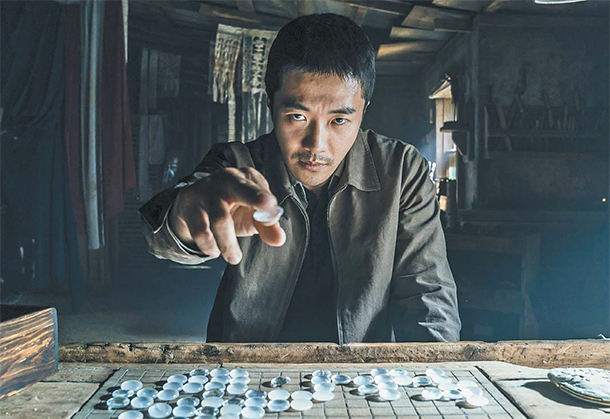 To the surprise of many in the local film industry, “The Divine Move 2: The Wrathful” turned out to be the perfect light-hearted action film for moviegoers over the weekend. [CJ ENTERTAINMENT]

Despite a lack of major buzz prior to its release, action film “The Divine Move 2: The Wrathful” found a passionate audience who rallied behind actor Kwon Sang-woo and praised his performance.

The local movie shot to the top of the box office on its first weekend, drawing 877,000 moviegoers to 1,246 screens. Although the first film left an impression on audiences for being an action-packed story about the game of baduk, also known as Go, thanks to an impressive performance from Jung Woo-sung, audiences did not show many signs of excitement for the sequel. However, Kwon was able to smash through low expectations with his action skills and the movie’s fast-paced plot.

The movie tells the story of protagonist Gwi-soo, who is on a blood-filled path of revenge after he loses everything that is dear to him because of the game of Go. After his Go master Heo Il-do is killed by the notorious gambler Busan Weed, he grows up to be a master of Go and throws himself into high-stakes bets that could cost him his life, building up his reputation to ultimately meet and defeat the legendary gambler and achieve his lifelong goal of avenging his master.

Based on the comic by the cartoonist Charles Addams, the characters were brought to life through the voices of its star-studded cast like of Charlize Theron and Oscar Isaac as the parents Morticia and Gomez Addams and Chloe Moretz and Finn Wolfhard as Wednesday and Pugsley Addams.

Japanese animated fantasy “Weathering With You” finished off the weekend with 95,000 viewers seeing the film at 479 screens.

Meanwhile, “Parasite” continued to fare well at the North American box office, becoming the highest-grossing foreign language film of the year by surpassing $11 million in ticket sales over the weekend. The previous record was held by Mexican film “No Manches Frida 2,” which was released in March and made over $9.2 million in ticket sales.