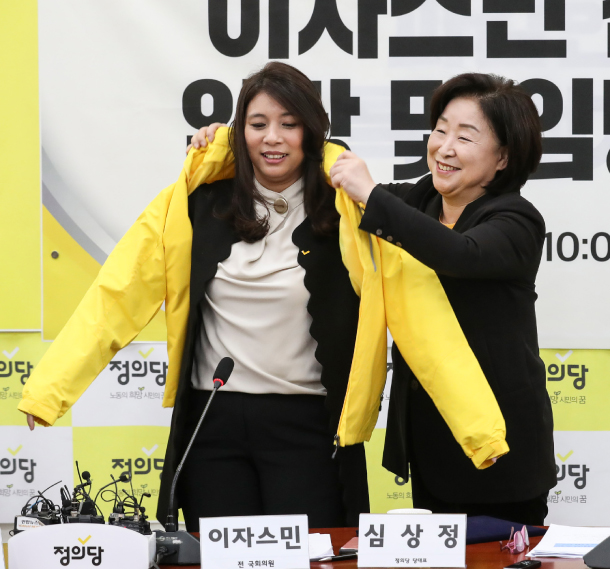 Jasmine Lee, left, is welcomed to the Justice Party by its chairwoman, Sim Sang-jeung, at the National Assembly in western Seoul Monday with a new yellow party jacket. [LIM HYUN-DONG]

Jasmine Lee, the Philippine-born naturalized Korean who formerly served as a lawmaker for the Saenuri Party, the predecessor of the main opposition Liberty Korea Party (LKP), vowed to start “a new beginning” protecting the rights of minorities on Monday as she joined the minor-left Justice Party (JP).

“I went through many difficulties in 2012 toward the end of my term, and even now, I’m really scared and worried,” Lee said at the National Assembly in Yeouido, western Seoul.

Lee was elected as a Saenuri proportional representative in 2012 during the former conservative Park Geun-hye administration. Her party, at the time, was the ruling party. She was the first naturalized Korean to earn a seat in the country’s parliament.

“Some 4 to 5 percent of our population is immigrants, who are minorities in our society. They go through various kinds of discrimination […] No one talks about the universal, basic rights of immigrants. Well, someone has to, and I hope [the party] helps me be that one.”

Lee has been appointed to serve as the chief of the JP’s special committee on human rights.

Asked by reporters why she left the major conservative LKP for a minor progressive party, Lee replied that she sensed the Saenuri Party’s attitude toward social minorities “vastly change” as it became the LKP. In February 2017, the party dropped its name for a new one to distance itself from scandal-plagued Park.

“I think the biggest difficulty was how people saw me, not how the party [treated me],” she noted. “I felt like my every move was being watched through a microscope.”

Asked whether she had any plans to run in the next general election in April, Lee refused to give a clear-cut answer, vaguely saying that it was up to her colleagues in the JP to decide who to nominate. A spokesperson for the JP said last week that the party has yet to determine Lee’s nomination.

Rep. Sim Sang-jeung, chairwoman of the JP, who said she personally met and persuaded Lee to join the JP, remarked Monday that she had always supported Lee even when she was in the Saenuri Party.

“I’ve always thought that she and our party were on the same team in the sense that we represent minorities who are discriminated against,” said Sim. “If the Justice Party were stronger than it is now, we could’ve been together from the very beginning. We’re off to a late start, but I’m glad we can hold hands and walk toward the same direction.”