Moon vows more in second half

Moon vows more in second half 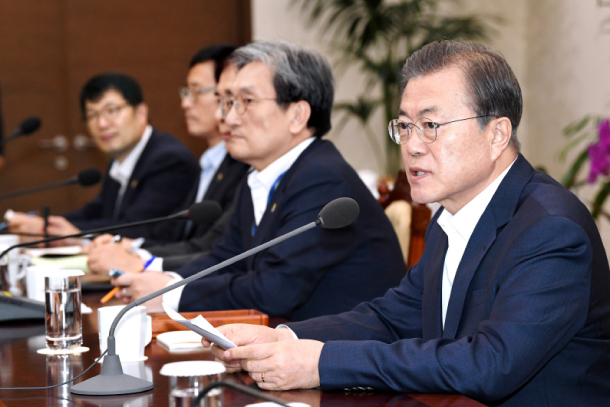 President Moon Jae-in speaks at a meeting with senior aides at the Blue House in central Seoul Monday. [BLUE HOUSE]

President Moon Jae-in said Monday he will persist with his economic, social and inter-Korean policies despite a public uproar over some of his major campaigns during the past 30 months.

“During the second half of my term, I will have a more humble and devoted approach to the people,” Moon said in opening remarks for a meeting with senior presidential aides. “I will listen to both praise and criticism and run the country with a heavy sense of responsibility.”

Moon hosted the meeting at the Blue House and used his opening remarks to tell the public his plans for the second half of his term. Saturday was the exact midpoint of Moon’s five-year presidency.

Moon said the first half of his term was a period of transition to bid farewell to the familiar ways of running the country. He said he had to “normalize” a country shaken by the abuse of power by his predecessor. “We are spreading the values of justice and fairness to all areas of the society,” he said.

Moon claimed a “miraculous turnaround” in the affairs of the Korean Peninsula. He said the government successfully countered Japan’s recent export restrictions and used them as an opportunity to strengthen Korea’s competitiveness in materials, components and equipment.

Moon said he will continue the policies of innovation, inclusiveness, fairness and peace in the next 30 months. He said innovation will create a future for Korea’s economy, while inclusiveness will resolve inequality and the wealth gap. He pledged to continue reform campaigns to make a more fair society.

Moon said his North Korea policy won’t change because the country has no other choice than peace.

As Moon vowed to stick with his vision, the latest opinion poll showed that the public is split over whether it wants another Democratic Party (DP) president or not.

The 1.9-percentage-point gap was within the plus or minus 3.1-percentage-point margin of error. The poll was conducted on 1,000 people over 19 years old, and its confidence level is 95 percent.

The JoongAng Ilbo asked the same question in previous polls, and the DP’s lead is shrinking. In its December 2018 survey, 43 percent said they wanted a DP candidate to win, 5 percentage points higher than the 38 percent who backed an opposition candidate. The gap widened to 10.9 percentage points in May this year with the DP leading the poll with 49 percent. In the survey last week, the gap narrowed to 1.9 percentage points.

Asked who they prefer as the next president, Prime Minister Lee Nak-yon was ranked highest with 24.2 percent. Former Prime Minister Hwang Kyo-ahn was ranked second with 14.5 percent, while 10.8 percent said they supported no one.

Asked what Moon did best during the first half of his term, 28.2 percent - the highest number - said nothing, while 23.3 percent said welfare and 20.8 percent said inter-Korean relations.