Hwang Jae-gyun is a proud baseball player, but he’s also a team-first guy as any. 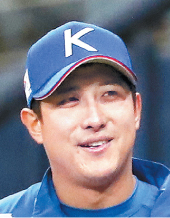 That is why Hwang, a former major league third baseman, has accepted a backup role on the national team at the ongoing Olympic baseball qualifying tournament and has been rolling with it.

Hwang has made just one start in four games so far at the World Baseball Softball Confederation (WBSC) Premier12 and has gone 0-for-4 at the plate with one run scored as a pinch runner.

That’s a far cry from Hwang’s performance at the inaugural Premier12 in 2015. He batted .276 (8-for-29) with two home runs and three RBIs, as Korea captured the championship. He was also named to the best third baseman of the competition.

This year, manager Kim Kyung-moon has been going with the hot hand at the hot corner, with Hur Kyoung-min getting the bulk of opportunities and providing a steady glove and some timely hitting in the absence of injured veteran Choi Jeong. Hwang, who can also handle first base, is available as a backup at both corner infield positions. Cleanup hitter Park Byung-ho is in Hwang’s way at first base.
Korea clinched the 2015 Premier12 title at the Tokyo Dome. And before the team’s first game at the stadium known as “The Big Egg” at this year’s tournament on Monday, Hwang said being at the dome brought back memories.

“This time around, I’ve got to do my job as the backup first baseman and backup third baseman,” said Hwang, who had a cup of coffee with the San Francisco Giants in 2017. “I played some first base in the second half of the season (with the KT Wiz in the Korea Baseball Organization), and I think that experience is helping me so much here. Since I’ve played third base most of the season, I’ve been spending more time practicing at first base here.”

Hwang said he’s not disappointed that he isn’t getting more opportunities.

“At international tournaments, the team’s winning is more important than individual players,” he said. “At a competition like this, we’re all supposed to do the best we can from our position and try to win as a team.”