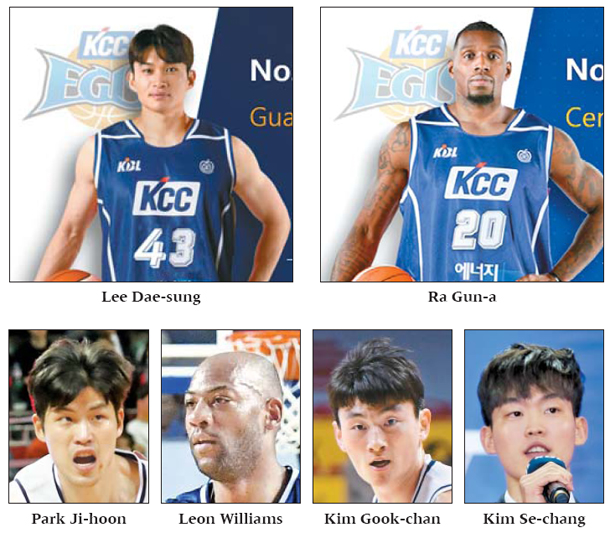 The Korean Basketball League (KBL) saws one of the biggest trades in the league’s history on Monday.

The Ulsan Hyundai Mobis Phoebus and the Jeonju KCC Egis had a 2-to-4 trade. It was perhaps a very big surprise for the Phoebus, as it decided to trade two starting players Lee Dae-sung and Ra Gun-a. In exchange, the Egis gave up four players — Leon Williams, Park Ji-hoon, Kim Gook-chan and Kim Se-chang.

Looking at trade history in the KBL, back in 1998, the Kia Motors also had a big trade where it gave away Hur Jae and accepted Chung In-kyo, plus the Wonju Narae Bluebird’s turn in the rookie draft. Then, in 1999, there was another big trade between the SK Knights’ Hyun Joo-yup and the Yeosu Goldbank Clickers’ Cho Sang-hyun. At the time, the Clickers paid out in cash as well as traded Cho in order to get Hyun.

After those two big trades, there weren’t any shocking trade deals in the KBL, until Monday.

It may seem like the Phoebus suffered a big loss as Ra and Lee have led the club to win the regular season and the championship title last year. But their acceptance of four players could indicate that the Pheobus is looking for a more long-term solution.

The Egis, on the other hand, seems to be looking for some immediate success. In the regular season, the Egis hasn’t won the title since the 2015-16 season. It last won the championship in the 2010-11 season.

Currently, the Egis have Lee Jung-hyun, one of the league’s best guards, and Song Gyo-chang leading the line-up. The addition of Lee and Ra has set extremely high expectations that the team will finally see some success this season.

On the same day as the trade, the Egis also parted ways with foreign player Joey Dorsey and signed Charles Rhodes, a veteran who’s been playing in the KBL since 2010.

Back at the start of the season, the club wasn’t able to focus on preparations as it was involved in a match-fixing and gambling scandal. During that controversial period, the Egis hired Chun Chang-jin as its new head coach.

To move on from the issues at the start of the season, the Egis is looking for some success this year. It looks like the team has acquired Ra and Lee to make that happen.

Despite the unorganized start to the season, the Egis is off to a solid start this season, ranking third with eight wins and five losses with a 0.615 winning percentage as of Monday 7 p.m. As the Egis is only two games behind the leader, the Seoul SK Knights, it is in with a chance of repeating its 2015-16 season success. But looking at the lineups, the Egis looked to be a little weaker than the Knights or the second-ranked Incheon ET Land Elephants.

But the Phoebus isn’t too concerned about immediate results. Head coach Yoo Jae-hak said he is looking toward the future, rather than the team’s current status.

“I was looking at the future, not the present,” Yoo said. “Yang Dong-geun and Ham Ji-hoon are our team’s faces. I’ve decided that we won’t be able to prepare for the future if we didn’t let go of Lee Dae-sung and Ra Gun-a.”

This season, the Pheobus is seeing some inconsistency as it is repeating winning and losing streaks. As of Tuesday 7 p.m., it is ranked sixth with six wins and seven losses with a 0.462 winning percentage.

The Phoebus is not off to the best start this season, but Lee and Ra had been fulfilling their roles in leading the team.

Although Lee got off to a slow start, he’s slowly picking up his pace and has averaged 13.5 points per game with 2.5 rebounds and 5.1 assists per game so far this season. This is quite an important season for Lee, as he will become a free agent after the season. Once the Phoebus won the championship last season, Lee was named the MVP. Following that, the Phoebus offered Lee an annual salary of 300 million won ($260,000) but for a better chance as a free agent, Lee lowered the contract and signed at 195 million won.

When it was reported that Lee lowered his annual salary, not many expected that Lee would continue his season with the Phoebus after the season.

Ra, too, has a year and a half remaining in his contract. Ra is the league’s best center, as he recorded the most number of career double-doubles in the KBL, at 229. He’s having another strong season by averaging 23.4 points, 14.9 rebounds and 1.8 assists per game, but he was involved in some unfortunate incidents this season where he was fined for hitting an opposing player with an elbow.

“I felt even more sorry when Gun-a, who we won four championship title with, just accepted it,” Yoo said. “Dae-sung was also surprised.”

Looking at the Phoebus, it’s been one of the strongest teams in the league as it advanced to the playoffs for eight consecutive seasons and won four times. Since the Phoebus has such a strong lineup, it was hard for it to develop young players. But now that it’s received four younger players from the Egis, the younger players are expected to be given more playing time for the remaining season. Along with the trade, the Phoebus is also considering changing their foreign player.

“Hyundai Mobis got rid of their heavy reliance on Ra Gun-a and decided to look up to the future,” said commentator Kim Seung-hyun. “KCC has created the best-ever lineup. Since Lee Jung-hyun and Song Kyo-chang played with Lee Dae-sung and Ra Gun-a when they played for the national team, they’ll get along well with the KCC, too.”