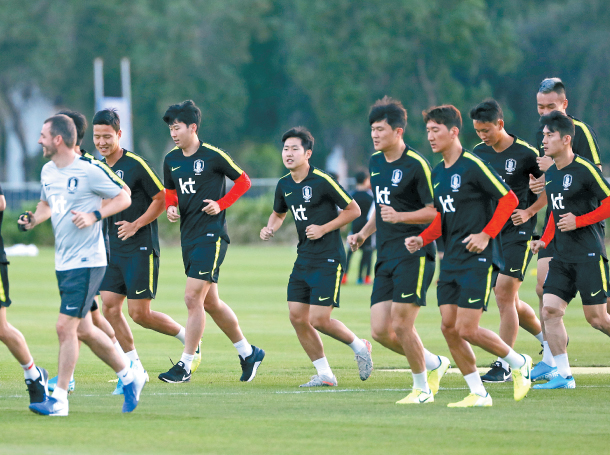 The South Korean national football team will continue its journey to the 2022 FIFA World Cup in Qatar, as it’ll face Lebanon in the second round of the Asian qualifiers on Thursday.

South Korea’s match against Lebanon will kick off at Camille Chamoun Sports City Stadium in Beirut, Lebanon, tomorrow, starting at 3 p.m., or 10 p.m. in Seoul. Following the qualifying match, South Korea will be heading to Abu Dhabi, the United Arab Emirates, to play a friendly match against the third ranked Brazil on Nov. 19.

According to the two team’s latest FIFA World ranking, the South Korean fans are expecting a big win as the Taeguk Warriors are ranked 39th and Lebanon is ranked 91st.

Prior to the match against Lebanon, South Korea headed to Pyongyang last month to play a qualifying match against North Korea. Under the heavy pressure of playing in North Korea, the two teams played to a scoreless draw.

In addition to playing away, their physical condition is expected to be another challenge.

Once again, the Taeguk Warriors will be led by captain Son Heung-min. Although Son was said to be struggling after a traumatic incident just a few weeks ago — during Tottenham Hotspurs’ Premier League match against Everton on Nov. 3 Son committed a foul on Andrea Gomes which left him with a bad fracture dislocation of his ankle — he seems to have bounced back to join the national team at the top of his game.

Recently, during Spurs’ Premier League match against Sheffield United on Saturday, Son scored his eighth goal of the season to lead his club to a 1-1 draw.

A few days before that, in Spurs’ Champions League Group B match against Red Star Belgrade on Nov. 6, Son scored two goals to help his side to a 4-0 victory. Son’s two goals during the Nov. 6 match allowed him to set a new record for the most number of goals ever scored by a Korean player in European football.

South Korea is currently the leader in Group H, but they are not in a safe position, yet. After three matches, the Taeguk Warriors have picked up two wins and a draw, totaling seven points. They have the exact same win-loss record and points as North Korea, but South Korea is ahead on goals scored, at 10.

If North Korea wins their next match, South Korea has to win to keep the top spot in the group standing. This month, North Korea is scheduled to play two qualifying matches, against Turkmenistan at Kopetdag Stadium in Ashgabat, Turkmenistan, on Nov. 14 and against Lebanon on Nov. 19 at Camille Chamoun Sports City Stadium in Beirut, Lebanon.

The November qualifying matches are the last ones of the year. Group H action will continue in March.