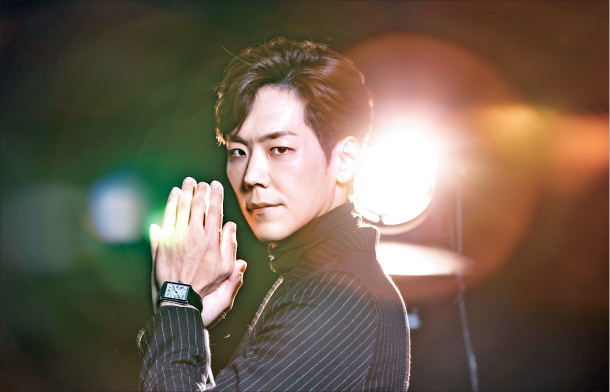 Musical actor Kai will take the stage in an upcoming production of “Rebecca.” [KWON HYUK-JAE]

It has been a hectic year for musical actor Kai. He has already appeared in the musicals “Phantom,” “Xcalibur” and “Ben-Hur,” and his next role in “Rebecca” will have him back on stage starting Nov. 16.

As most local musicals run for about three months, the 39-year-old actor has barely left the stage all year.

Since making his 2011 stage debut in “The Story of My Life,” the prolific actor has been a part of three to four projects every year.

“I was always hungry to act because I debuted at 30,” said Kai during a recent interview with the JoongAng Ilbo, the affiliate of the Korea JoongAng Daily.

“The only way actors can grow is by doing a lot of work. I have come to a point where I relieve stress while I perform on the stage.”
Kai graduated from Seoul Arts High School and Seoul National University, where he majored in vocal music.

He went on to receive a master’s and a doctorate degree in vocal music from Seoul National University as well.

It’s no wonder that Kai was dubbed the elite musical actor when he broke into the musical world. His educational background helped him get attention from the media and interest from the public, but it was also something he had to overcome.

“In the early days, I used to play roles of well-off young men simply because I studied classical music. People used to tell me I should forget about all the things I learned from school if I wanted to add variety to my characters.”

But Kai didn’t listen to them. “Vocal music is not a sophisticated form of art, but it helps you to have all the basic skills you need to know when you project your voice. It is a weapon that you can’t purchase with money,” Kai added.

In order to make up for his weakness, Kai put a lot of effort into polishing his acting, so as not to lag behind other actors.
In 2017, when Kai appeared in “Ben-Hur,” he recalls that it was the time that he “overcame his limits.”

“I worked tirelessly to learn how to act. I kept trying hard to sing better. Finally, the invisible wall ahead of me collapsed.”
After that, Kai began to land more diverse roles.

“Until ‘Ben-Hur,’ most of my characters were flat, but I began to take on more complex roles after that.”

By portraying a wide range of characters, Kai had a breakthrough. “I never really expressed my emotions as much as I do now when I did vocal music. They ask me how I’m doing all those musicals, but I let go of all the stress and hard feelings through acting.”

The singer enjoyed every moment on stage, but he struggled with an identity issue.

Kai was neither a vocalist nor a musical actor to those who worked in the industry. “People in the musical world say my singing is too classical, while people in the classical music world say the way I sing is way too trendy. There is a huge gap between the two, but I came to a conclusion that I’m somewhere between the two.”

In order to show his full range as a singer, he recently held a concert titled “Seoul Klassik” at the LG Arts Center, located in Yeoksam-dong, southern Seoul.

His performance was filled with a wide variety of pieces, from “Widmung” by composer Robert Schumann to pieces from musicals he has appeared in and songs from his latest albums.

Kai recently released an album, which consists of older Korean songs such as “I’m Yours” and “Nostalgia.”

“I’m interested in promoting songs that have a Korean sentiment in them.”

The concert depicted Kai’s musical journey. It opened with a recorded audio file of him singing a song when he was a part of a children’s choir.

“I think I’ve already overachieved the goal I set in 2008 when I debuted [as a singer]. I was once obsessed with finding something new [in me], but I try not to do it now. I find pleasure in meeting all the new characters and in the way I approach music.”