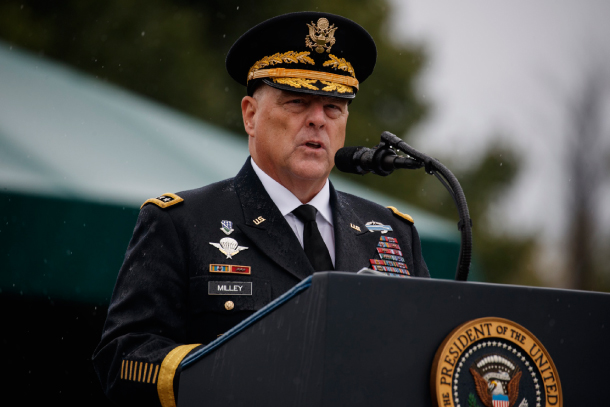 Mainstream America wonders why the United States has troops in South Korea and Japan and why wealthy allies can’t pay for their own defense, said Mark Milley, chairman of the U.S. Joint Chiefs of Staff (JCS), ahead of a trip to Japan and South Korea Monday.

His remarks came as Washington is pressuring Seoul to pay more for the upkeep of U.S. troops on South Korean soil in negotiations to renew a defense cost-sharing pact and also ahead of the expiration next week of an intelligence-sharing pact between South Korea and Japan.

Ahead of his first overseas trip as JCS chief Monday, Milley told reporters on a U.S. military aircraft en route to Japan that there are “main street” questions in America on the stationing of U.S. troops and that it is “incumbent” on the Pentagon to “adequately explain how the U.S. military is a stabilizing force in Northeast Asia in preventing and deterring the outbreak of armed conflict.”

Milley, according to a Pentagon release, noted that the “average American” looks at U.S. troops in South Korea and Japan and asks fundamental questions such as: “Why are they needed there? How much does it cost? These are very rich and wealthy countries, so why can’t they defend themselves?”

Seoul and Washington are in the midst of tense negotiations to renew their bilateral Special Measures Agreement, which expires on Dec. 31. Washington officials reportedly have been demanding approximately $4.7 billion, around fivefold the amount Seoul currently pays to keep some 28,500 U.S. troops stationed in South Korea.

Since his presidential campaign in 2016, U.S. President Donald Trump has suggested a withdrawal of U.S. troops from South Korea and Japan if the allies didn’t pay more and has questioned the necessity of an extended nuclear umbrella in the region.

Washington may be using the withdrawal or reduction of U.S. troops as a negotiation tactic to pressure Seoul to pay more for defense and also renew its bilateral intelligence-sharing pact with Tokyo signed in November 2016.

Milley addressed tensions between the U.S. allies South Korea and Japan and stressed the need for the General Security of Military Information Agreement (Gsomia), which is set to expire at midnight on Nov. 22, three months after Seoul announced its decision to terminate the pact.

“The United States, South Korea and Japan are stronger when we are together and shoulder to shoulder,” Milley told reporters. He described Gsomia as being key for regional security and stability as it is used to exchange details on North Korea’s missile tests.

Washington has a separate three-way military information-sharing pact with Seoul and Tokyo but has expressed disappointment on the Gsomia withdrawal decision.

Milley said that South Korea announced its withdrawal from Gsomia “from a security standpoint.” The U.S. Department of Defense release didn’t make any mention of Japanese export restrictions, including the removal of South Korea from a so-called white list of trusted trade partners, that are widely seen as retaliation for the South Korean Supreme Court rulings last year ordering Japanese companies to compensate forced labor victims during World War II.

But it said that there are “disagreements between South Korea and Japan arising from Japan’s occupation of Korea from 1905 to 1945.” Korea became a Japanese protectorate in 1905 and was annexed in 1910, and colonial rule lasted through Aug. 15, 1945, when Japan surrendered in World War II.

“These are friction points within the alliance that need to be resolved amicably between countries that have way more in common — common values, common outlook, common security needs,” Milley said. “We’ve got to get past some of these friction points in a way that is helpful to the alliance.”

He stressed that South Korea and Japan have “common security problems to solve,” including deterring attacks, provocations and threats from North Korea and China, and will be “stronger together rather than separate.”

Milley added, “It is clearly in China’s interests and North Korea’s interests, to separate South Korea from Japan and the United States,” while it is in Washington’s interests “to keep all three of us very closely aligned.”

He described U.S. treaty allies, South Korea and Japan, along with Australia and New Zealand, as being key to Washington’s strategy in Asia. The Trump administration has pushed a so-called Indo-Pacific strategy, unveiled in late 2017, which can be seen as a policy trying to contain China in the Asia-Pacific region.

The four-star general is a Princeton graduate and a former chief of staff of the U.S. Army. He took the post as JCS chief at the end of September and serves as the principal military adviser to the president.

Milley kicked off his trip to Tokyo Monday and met with Japanese Prime Minister Shinzo Abe and other officials including Japan’s Defense Minister Taro Kono Tuesday.

“We want to try to resolve that [Gsomia] issue before it expires,” Milley was quoted by Kyodo News as telling reporters after meeting with Abe Tuesday, saying that the Gsomia issue will “be a point in discussion” in Seoul.

Kim In-chul, the South Korean Foreign Ministry spokesman, said in a press briefing Tuesday, “When Japan withdraws its unfair export measures, we will be willing to review the decision to terminate Gsomia.”

Tokyo has been calling for the forced labor issue to be resolved first, while Seoul maintains it can’t meddle in court rulings because of the separation of powers.