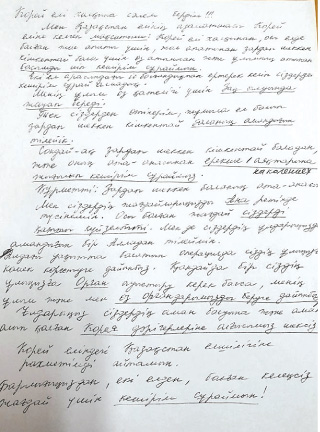 The mother of a 20-year-old Kazakh man behind an alleged hit-and-run case recently gave the handwritten letter pictured above to a Korean welfare center for immigrants in South Gyeongsang. [YONHAP]

In mid-September, a 20-year-old Kazakh man sparked nationwide furor when the news broke he was behind an alleged hit-and-run involving an 8-year-old Korean boy in Changwon, South Gyeongsang.

The suspect fled the country 18 hours after the incident as the victim laid unconscious in an intensive care unit.

As the Kazakh awaits his first hearing, scheduled for today, a visitor from home will be watching him from the benches — and in her mind, apologize to the victim for what she calls failed parenting.

A spokesperson of a welfare center for immigrants in South Gyeongsang said Monday that the Kazakh suspect’s mother, 44, arrived in Korea recently and hand-delivered a letter to the center, saying it was for the victim.

“She said she wanted to apologize to the victim and his family for failing to educate her son,” the spokesperson said. “She said she had ‘lost’ her husband and raised her son in difficult circumstances. She said her son should pay for his crime and that she wanted to devote her life to helping the victim.”

The spokesperson continued that the suspect’s mother expressed her apologies to the Korean public as well, saying she was sorry for causing pain and shock.

The mother was said to be planning to leave Korea on Friday, after watching her son’s trial today.

On Sept. 16 around 3:30 p.m. in Changwon, 187 miles southeast of Seoul, the suspect allegedly drove into an 8-year-old Korean boy and immediately fled the scene. Police discovered his empty car about 1.3 miles away on an overpass in Busan. Officers later found out that the car was registered under a different person’s name because the suspect was an illegal immigrant in Korea.

Police retrieved fingerprints from the car and realized that it matched those from a foreigner who had already left the country.

The suspect departed Incheon International Airport on Sept. 17 at around 10:25 a.m. for Uzbekistan, and from there, left for Kazakhstan.

Koreans placed the blame on the police and customs officials for letting him off the hook, while police cited his illegal immigrant status as the reason they were unable to track him down any faster as they had no official records showing his whereabouts.

Korean authorities worked with Interpol to bring the suspect back, and after weeks of hiding, he landed at Incheon International Airport last month, handcuffed and flanked by Korean police officers, to stand trial for the hit-and-run case.

Under Korean law, an illegal immigrant is allowed to leave the country under the circumstances that he or she has a passport, a plane ticket and no pending charges.

According to Korean police, the suspect arrived in Korea on July 14, 2018, through a 30-day short-term visa, but stayed illegally over the following 14 months.

The victim suffered a brain hemorrhage but his father said he has recovered since, and is now able to talk and walk normally.

Cho Kuk, who was the justice minister when the incident occurred, ordered his underlings to figure out why there were so many illegal immigrants in the country and search for an “effective way” to reduce the rising figure.

BY LEE SUNG-EUN, WE SUNG-WOOK [lee.sungeun@joongang.co.kr]