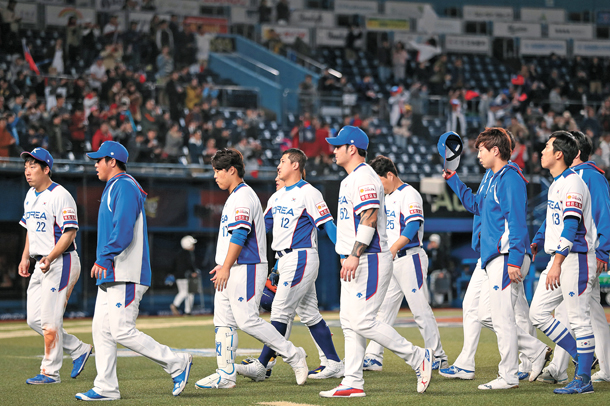 The Korean baseball team walks off the field after losing 0-7 to Chinese Taipei during a Super Round game at Zozo Marine Stadium in Chiba, Japan on Tuesday. [YONHAP]

It seemed like Korea once again got off to a quick start as it got runners on first and second base with no outs. However, Korea’s third, fourth and fifth batters were quickly out from two fly balls and a strikeout, so the team wasn’t able to take the lead.

At the top of the second inning, Chinese Taipei took the lead with Kao Yu-chieh’s double. Then, as Hu Chin-lung added a single right after it, Chinese Taipei extended its lead to 2-0. Korea hoped to make a comeback, but the batters weren’t able to break the silence.

The batters weren’t the only ones struggling — Korea’s starter Kim Kwang-hyun also didn’t seem to be in his best condition. After giving up another run at the top of the fourth, Kim was pulled out the game. Team Korea’s strong pitchers weren’t able to continue their streak against Chinese Taipei, as they gave up four more runs in the remaining game to suffer the first loss of the tournament.

Kim picked up a loss as he gave up eight hits and three runs while striking out three throughout three and one third of an inning.

“I have no excuses today,” said pitcher Kim Kwang-hyun after the game. “I’ve pitched my worst game this season. The Taiwanese batters had great timing with fastballs and were good with changeups. I’ll work harder to prepare for the next game.”

With a loss, Korea has a Super Round record of two wins and a loss.

Team Korea’s batting lineup struggled significantly against the Chinese Taipei pitchers, as it only managed to get five hits and were given five walks while being struck out eight times.

Once again, cleanup hitter Park Byung-ho’s bat stayed silent throughout the game. As of Wednesday’s game, Park doesn’t seem to be fulfilling his role as the national team’s cleanup hitter, as he has a disappointing 0.167 batting average and 0.167 slugging percentage. Designated hitter Kim Jae-hwan hit the team’s first home run during a game against the United States on Monday, but he’s also not having the greatest tournament as he only has a 0.200 batting average.

Due to the difficulty at bat, manager Kim Kyung-moon hinted that there could be some changes in the batting lineup after the game on Wednesday.

“Since we don’t have games tomorrow [on Wednesday] and the day after [on Thursday], we’ll rest, and I’ll talk with our batting coach and come up with a lineup for our game against Mexico,” said Kim.

Although it was a disappointing loss, captain Kim Hyun-soo took it as motivation for the upcoming games.

“This loss is a wake-up call for us, and we’ll try to learn from it,” Kim Hyun-soo was quoted as saying. “It would have been nice to keep on winning, but we knew we couldn’t win every game. It’s disappointing, but we have more games to play and we’ll try to win those.”

A win at the tournament will guarantee the defending champions a spot at the Olympics, but if it doesn’t make it, Korea could still qualify for the 2020 Tokyo Games as the best finisher among the Asia/Oceania teams.

Since Japan has already qualified as host, Korea will have to finish ahead of Chinese Taipei and Australia.

In the Super Round, Korea now has two more games remaining, perhaps the most important ones of all. Korea will play against Mexico tomorrow at 7 p.m., and on Saturday, it’ll finish off the Super Round with a game against Japan at 7 p.m. Both games will be played at Tokyo Dome.

After the Super Round, the top four teams will advance to the next round, where the top two teams will play against each other for the trophy and the third- and fourth-ranked teams will compete for a bronze medal.