The Kiwoom Heroes signed a three-year contract with catcher Lee Ji-young on Wednesday. 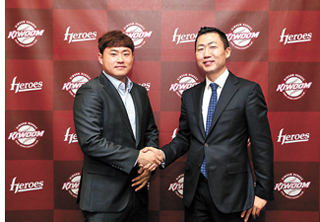 With the signing, Lee became the first free agent in the KBO this year to sign a contract. Before Lee, the Lotte Giants announced the signing of Noh Kyung-eun, who was a free agent after the 2018 season.

“I’m glad I can play for Kiwoom next year,” Lee said. “This is all thanks to the fans’ support. I’m also thankful to the club for offering me a contract with good conditions. I’m excited about my next three years with the Heroes and with the goal of winning the Korean Series next year, I’ll play my best in every game.”

After graduating from Kyungsung University, Lee joined the Samsung Lions as a training player in 2008, as he was undrafted. In 2009, Lee was registered as an official player and made his KBO debut by playing in 23 games for the Lions. Lee played only for the Lions until 2018, and when the season ended, he joined the Heroes in a three-way trade between the Lions, Heroes and the SK Wyverns.

As a veteran catcher, Lee led the Heroes’ young pitchers this season to help the club to advance to the Korean Series for the first time since 2014.

Lee finished the 2019 regular season with a 0.282 batting average with 87 hits and 39 RBIs in 106 games. While Lee didn’t stand out throughout the regular season, he definitely left an impression in the postseason.

Then, in the Korean Series, Lee still helped the Heroes in three of the four games with a 0.300 batting average with three RBIs.

“I’m very happy that we can play next season with Lee Ji-young,” said the Heroes general manager Kim Chi-hyun. “We needed Lee Ji-young, and he also had a strong desire to stay. We talked to each other on the phone regularly and were able to meet each other’s conditions quickly. His good stats this season were important, but we highly credited his hard work in batting, defense, base running and everything else. Lee Ji-young showed an ideal image of a veteran to the young players. He will be a great influence to the team.”

This season, Lee and pitcher Oh Ju-won were the two free agents from the Heroes. The club said they are still negotiating with Oh.

Before Lee’s signing announcement, the Wyverns announced their signing of a foreign pitcher, Ricardo Pinto, earlier Wednesday. The Wyverns said Pinto has agreed to a one-year contract at $800,000 — $100,000 in signing bonus, $450,000 in guaranteed salary and $250,000 in incentives.

With the signing, the Wyverns will be parting ways with one of its two foreign pitchers.