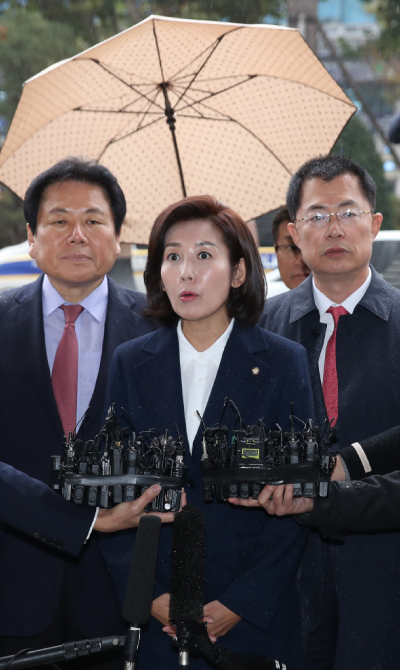 Rep. Na Kyung-won, center, floor leader of the main opposition Liberty Korea Party, turns herself in to the Seoul Southern District Prosecutors’ Office on Wednesday to be questioned about a physical scuffle in the National Assembly in April. [YONHAP]

Rep. Na Kyung-won, floor leader of the Liberty Korea Party (LKP), was questioned Wednesday by the prosecution about a physical clash among lawmakers in April.

Na appeared at the Seoul Southern Prosecutors’ Office around 2 p.m. to submit to the questioning about the violent brawls among the members of the ruling and opposition parties in April at the National Assembly.

“History will remember the ruling party’s cruel attempt to control powers by creating a new investigation body for senior public servants and introducing a new proportional representative system,” Na said before entering the prosecution. “I and the LKP will defend the liberal democracy and parliamentary democracy of the country.”

Members of the ruling Democratic Party (DP) and the main opposition LKP were locked in physical standoffs from April 25 to 26, as the LKP resisted the DP’s legislative alliance to fast-track contentious bills on electoral reform and weakening the power of the prosecution.

Following the incident, the rival parties submitted petitions to the prosecution against one another, demanding probes. A total of 122 people, including 110 lawmakers, were asked to be investigated.

Of the 110 lawmakers being investigated in the case, 60 are from the LKP, 39 from the DP and seven are from the Bareunmirae Party. Another three are Justice Party representatives, and National Assembly Speaker Moon Hee-sang is an independent lawmaker.

While the DP and others cooperated with the probe, the LKP lawmakers have refused to show up for questioning. Na is the first to do so.

Na was suspected of having ordered a group of LKP lawmakers to physically block Bareunmirae Rep. Chae Yi-bai from attending a committee meeting, where contentious bills were scheduled to be fast-tracked. On April 25, Chae was confined for six hours by about 10 LKP lawmakers in his office.

Telling his lawmakers to boycott the questionings, LKP Chairman Hwang Kyo-ahn visited the prosecution on Oct. 1, although he was not summoned. “I am the chairman of the party, and I should be held entirely responsible,” Hwang said at the time. “The prosecution must behead me and stop the probe now.”

He, however, exercised his right to remain silent at the prosecution.

The investigation is seen as a crisis for the LKP ahead of the April general election. While lawmakers from other parties are accused of using violence, the LKP lawmakers are facing heavier charges of obstructing a legislative activity. Under the National Assembly Act, the punishment for the latter is more severe.

Anyone who stops a lawmaker from entering a plenary session or a committee meeting and those who use force to interrupt a session are punishable by up to five years in prison or a fine of up to 10 million won ($8,600).

The law also says anyone punished with a fine over 5 million won for obstructing a legislative activity cannot run in an election for a minimum of five years – a tremendous setback for any politician, particularly ahead of next year’s general elections.