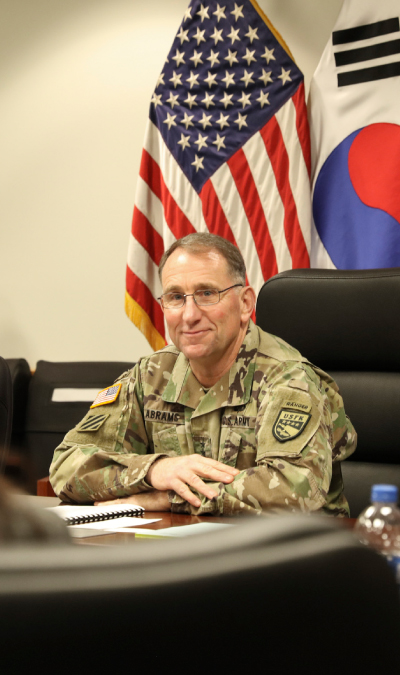 U.S. Forces Korea Commander Gen. Robert Abrams meets with media on Tuesday at Camp Humphreys in Pyeongtaek, Gyeonggi, in this photo provided by his office. [YONHAP]

Washington is stepping up pressure on Seoul not to withdraw from its bilateral intelligence-sharing pact with Japan next week.

The South Korea-U.S. 44th Military Committee Meeting (MCM) and 51st Security Consultative Meeting (SCM) are scheduled for Thursday and Friday and come just a week ahead of the expiration of the General Security of Military Information Agreement (Gsomia) between Seoul and Tokyo on midnight Nov. 22. At the same time, Seoul and Washington are in tough negotiations over renewing a bilateral defense cost-sharing deal, the Special Measures Agreement (SMA), which expires at the end of this year.

Top U.S. brass have been urging for an extension of Gsomia, which Washington sees as important to trilateral security cooperation with Tokyo and Seoul.

Gen. Robert Abrams, commander of the U.S. Forces Korea (USFK), told reporters Tuesday that the “fundamental principle” of Gsomia was to send a “clear message to the region” that South Korea and Japan could put aside “historical differences and put at the forefront stability and security of the region.”

Abrams added, “Together, we are much stronger for providing for a stable and secure Northeast Asia. And without that, there is a risk of sending the wrong message that perhaps we are not as strong.”

Washington is promoting three-way security cooperation with its allies in Northeast Asia, Seoul and Tokyo, to counter China and Russia’s strategic interests in the region.

During a press event at Camp Humphreys in Pyeongtaek, Gyeonggi, marking the one-year anniversary of his taking the USFK chief post, Abrams also addressed the defense cost-sharing pact, saying Seoul can pay more as it benefits the South Korean people and economy.

Abrams addressed concerns in South Korea over reports about Washington’s demands for a steep increase in Seoul’s contribution by saying that “a lot of the speculation in the information space is not well-informed.” He said he remains “optimistic” that the two governments “can find some common ground.”

The current SMA is set to expire on Dec. 31, and Washington reportedly is demanding Seoul pay approximately $4.7 billion, nearly five times the current amount. JCS Chairman Milley told reporters Monday that the average American questions the necessity of keeping U.S. troops in South Korea and Japan, which was construed as a negotiating tactic.

While visiting Tokyo Tuesday, Milley said in a meeting with Japanese Prime Minister Shinzo Abe that he plans to discuss Gsomia in Seoul and wants to “try to resolve that issue before it expires.”

Japanese Foreign Minister Toshimitsu Motegi stressed the importance of three-way cooperation with Seoul and Washington. He said he told Milly that any discord would only destabilize the region and benefit North Korea, China and Russia.

Motegi said he and Milley agreed on the importance of Gsomia and that the JCS chief promised to convey this message to Seoul.

While the Gsomia termination is not likely to be on the official agenda for the SCM and MCM meetings, the issue is expected to be brought up in discussions, according to Seoul military sources. South Korean Defense Minister Jeong Kyeong-doo on Friday will meet with Esper for the SCM, where trilateral cooperation with Japan has been discussed in the past.

A final chance to discuss the Gsomia issue could be next week, as Defense Minister Jeong may meet with his Japanese counterpart Taro Kono on the sidelines of an annual Asean defense ministers’ meeting in Thailand that runs from Saturday to next Tuesday. Esper may try to arrange a three-way meeting with Jeong and Kono.

President Moon Jae-in last week held an impromptu 11-minute meeting with Prime Minister Abe on the sidelines of an Asean summit in Thailand, and the Blue House said that the two sides stressed that Seoul-Tokyo relations are crucial.

The Blue House National Security Council on Aug. 22 announced its decision not to extend the Gsomia because Japan removed South Korea from its so-called white list of trusted trading partners citing a breach of trust without presenting concrete evidence. South Korea determined it was not in its national interest to exchange sensitive military information under such circumstances.

Tokyo maintains that all compensation issues from colonial rule were resolved with a 1965 bilateral claims agreement.

In a meeting with leaders of five political parties last Sunday, Moon asked them to stand by his decision to withdraw from Gsomia and asked them to speak “in one voice for matters that concern the national interest.”

In a press conference Sunday, Chung Eui-yong, director of the Blue House National Security Office, stressed that Japan was South Korea’s closest neighbor and its “partner for peace and security in Northeast Asia.”

However, Chung said, “If South Korea-Japan relations are normalized, our government has intentions to reconsider extending Gsomia again.”