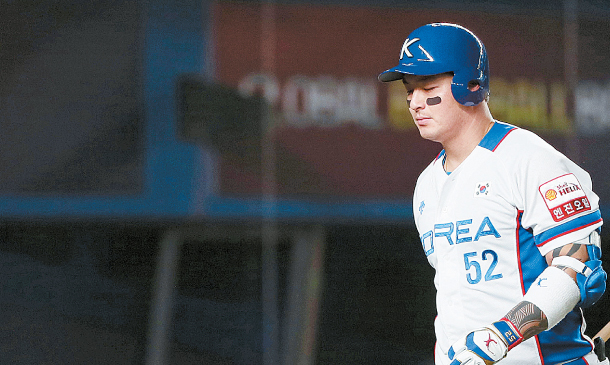 Park Byung-ho walks to the dugout after a strikeout during a game against Chinese Taipei in the WBSC Premier12 Super Round at Zozo Marine Stadium in Chiba, Japan, on Tuesday. [YONHAP]

The Korean national baseball team’s cleanup hitter Park Byung-ho is struggling to make a mark at the Premier12.

Looking at his season with the Kiwoom Heroes, Park had his ups and downs but finished strong by topping the league in home runs at 33.
Park joined the national baseball team hoping to continue his home run streak at the World Baseball Softball Confederation (WBSC) Premier12. But that doesn’t seem to be the case so far. Team Korea has played in six games throughout the tournament, and Park’s bat has been pretty silent, as he has a 0.167 batting average and 0.167 slugging percentage.

It took until Korea’s last Group C game against Cuba on Nov. 8 for Park to finally get his first hit of the tournament. Then, he added another and an RBI. Following the game, manager Kim Kyung-moon said, “It’s a relief that Park Byung-ho seems to be getting back in shape.”

But once the team headed to Japan for the Super Round, Park went quiet again. Against the United States on Monday, Park had no hits and was given two walks, and against Chinese Taipei on Tuesday, he added a hit in four at-bats.

Throughout Park’s 18 at-bats in the tournament, he’s had three hits. When there’re runners in scoring positions, he’s only had a hit and a walk, nowhere close to be fulfilling his role as a clutch cleanup hitter.

Since Park hit some crucial home runs for the Heroes throughout the postseason, his performance with the national team is a big disappointment.

But some fans hope Park is following in the footsteps of former star player Lee Seung-yuop, back at the 2008 Beijing Olympics. At the time, the national team’s manager Kim assigned Lee as Korea’s cleanup hitter. Just like Park, Lee struggled in the beginning. In the seven games before the semifinals, Lee only had three hits in 23 at bats.

Despite Lee’s struggle, Kim continued to assign him as Team Korea’s cleanup hitter. He finally came through when it really counted, hitting a two-run homer in the semifinal game against Japan to lead Korea to a come-from-behind victory.

Then, Lee hit another two-run home run in the gold medal game against Cuba, helping Korea win its first-ever gold in baseball at the Olympics.

It’s been 11 years since that historic moment, and Kim once again took the helm of the national team to start the long road to repeating that success. This time, he chose former major leaguer Park as cleanup hitter.

Meanwhile Lee, a KBO legend known as the Lion King who retired in 2017, is keeping a close eye on Park’s performance as a commentator for the games.

“Byung-ho must be very distressed,” said Lee. “I’m very well aware of that pressure, so in the beginning, I just nodded at him. It will be painful, but he needs to get through it. Park Byung-ho is a batter who can get through this.”

Looking at Park’s season, he is not on the top of this game. Toward the end of the regular season, Park had to get injections due to wrist pain. As the Heroes advanced to the Korean Series, Park played in 11 extra games before his season ended.

“It was a relief that our team won [in the group stage], but I was disappointed [with myself],” Park said.

As of Thursday, Korea is ranked third in the Super Round standings with two wins and a loss. Japan and Mexico are tied for the lead with three wins and a loss. Due to this, Korea now has to pick up wins against Mexico and Japan over the next two days to top the standing.
Along with the advancement into the final, two wins will also guarantee Korea’s spot at the 2020 Tokyo Olympics.

Though the team has two big games ahead of it, it is likely that Kim will continue to include Park in the lineup. However, as Choi Jeong is expected to return to the team today, some of the slugging pressure will be lifted off Park.

“I’ll be cautious about shaking things up,” Kim was quoted as saying on Yonhap on Thursday. “I’ll watch the batting practice tomorrow and go with the guys that look good in the cage. But I don’t expect major changes.”

Back at the inaugural edition of the tournament in 2015, Park hit a big home run during the final game against the United States in the Tokyo Dome. In the remaining games, Park hopes to repeat his success, and eventually, help his team defend the title.

“I rewatched that scene on the preview clip for the tournament,” Park said. “I want to make up [for my performance so far].”