AOA goes on a moon hunt on new EP

AOA goes on a moon hunt on new EP 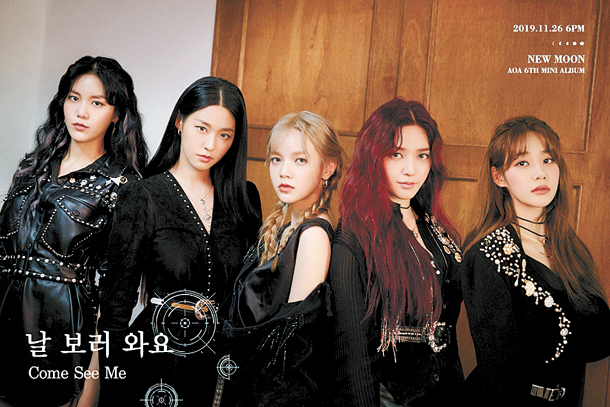 Girl group AOA is making a big return on Nov. 26 with their sixth EP “New Moon,” its agency FNC Entertainment said on Thursday.
The theme of the upcoming EP is that the members of AOA have transformed into “Moon Hunters” — powerful women hunting the moon and looking for freedom.

“The new track, ‘Come See Me,’ shows off a very mystical side of AOA, like the cold wind that blows in the dark night,” FNC Entertainment said.

AOA made their debut in 2012 as an eight-member girl group. After members Youkyung, Choa and Mina recently left the group, AOA began performing as a five-member group starting this May.

“New Moon” is the first new release from the newly-configured group.

The group recently competed on the Mnet competition program “Queendom,” along with five other K-pop acts.

Although AOA didn’t win during the show’s finale on Oct. 31, they made headlines with their performance of Mamamoo’s “Egotistic,” in which they had male actors dress up in women’s clothing for a role-reversal dance.

AOA finished the show in fourth.