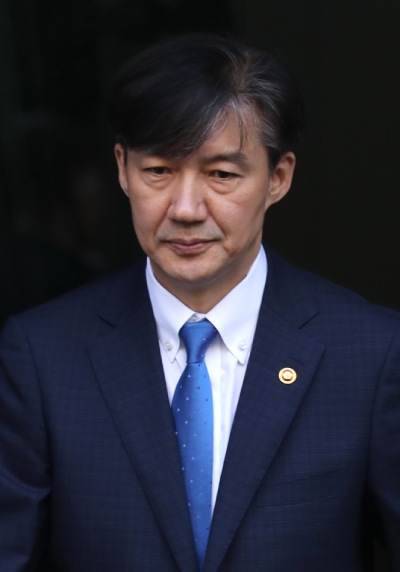 Former Justice Minister Cho Kuk was questioned Thursday about his role in his family’s controversial academic dealings and dubious investments.

The questioning of President Moon Jae-in’s close political ally began at 9:35 a.m. at the Seoul Central District Prosecutors’ Office in Seocho-dong, southern Seoul. Cho reportedly was accompanied by a lawyer.

The questioning of the 54-year-old Cho, once a member of Moon’s inner circle, took place a month after his resignation as justice minister after 35 days in the cabinet and 79 days since the probe of his family began with the Aug. 27 raids of various sites connected to his family’s academic and financial affairs.

Prosecution sources told the JoongAng Ilbo Thursday that Cho was exercising his right to remain silent and refusing to answer questions throughout the questioning.

The Anti-Corruption Investigation Department II of the Seoul Central District Prosecutors’ Office conducted the questioning of Cho. Prosecutors are looking into Cho’s possible links to the 15 charges brought against his wife, Chung Kyung-sim. On Monday, the prosecution indicted her on 14 charges, on top of the charge of forging an academic award from Dongyang University for her daughter from September.

Chung is charged with making stock investments in other people’s names in January 2018, when Cho was working at the Blue House. Senior civil servants and their spouses are prohibited by law from making direct stock investments.

Chung is suspected of having made an investment in WFM, an English education company that expanded into the making of batteries, based on inside information Cho might have obtained as a senior presidential aide. She is also believed to have gotten a sweetheart deal on the price of the WFM shares, which could eventually be considered a bribe to her husband.

Prosecutors scrutinized Cho’s and Chung’s financial records and learned that Cho transferred 50 million won ($42,700) to his wife using an automated teller machine near the Blue House on the same day when Chung made the WFM stock purchase.

Chung’s lawyers told the JoongAng Ilbo earlier this week that Cho had not known about Chung’s investment. They said Tuesday that Cho met with them multiple times and prepared for his own questioning.

During their legal consultations with Cho, Cho reportedly told the lawyers that he knew his wife was trading stocks after he joined the Blue House. They also said Chung had told the prosecution during her own questioning that Cho knew “nothing.”

Cho may also face a bribery charge over a scholarship given to his daughter. Cho Min, now 28, received a six-semester scholarship from the medical school of Pusan National University in 2016, although her grades were so poor that she even flunked a semester.

The prosecutors said the scholarship could be viewed as a bribe to Cho. Dr. Roh Hwan-jung, the current director of Busan Medical Center, awarded Cho’s daughter the scholarship worth a total of 12 million won when he was her academic adviser at the medical school. Prosecutors suspected Cho of pulling strings to help him get the director’s job while he served as senior presidential secretary for civil affairs from May 2017 to last July.

Prosecutors also suspect that Cho played a role in getting fake internship certificates for his daughter and son from the Center for Public Interests and Human Rights Law of Seoul National University (SNU). Cho is a professor of law at SNU.

Cho is also suspected of assisting his wife in alleged attempts to destroy evidence. He was also expected to be questioned about corruption scandals involving his younger brother and the Ungdong School Foundation, a private school run by his family.

When Cho appeared for questioning Thursday, he did not have to face the media. He was the first beneficiary of the new public affairs guidelines by the prosecution. Last month, the Supreme Prosecutors’ Office decided to stop publicly summoning high-profile suspects.

The media waited in vain for Cho in the lobby of the building.

The prosecution’s new rules, supposedly intended to protect the rights of suspects and witnesses, were pushed by Cho in his short tenure as justice minister.

Previously, the Justice Ministry allowed the prosecution to inform the media about investigation schedules and suspected charges to be made against “public figures.” That category included civil servants higher than vice-minister level, lawmakers, leaders of big companies and local governments and political party heads.