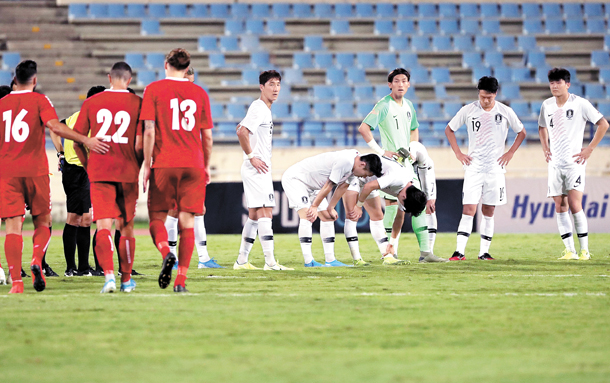 The Korean national football team, in white, reacts after playing to a 0-0 draw against Lebanon during the team’s Group H match in the second round of the Asian qualifiers for the 2022 FIFA World Cup at Camille Chamoun Sports City Stadium in Beirut, Lebanon, on Thursday. [YONHAP]

The Korean men’s football team played to a 0-0 draw against Lebanon during the second round of the Asian qualifier for the 2022 FIFA World Cup at Camille Chamoun Sports City Stadium in Beirut, Lebanon, on Thursday.

Due to the ongoing anti-government protests in Lebanon, the Korean football team had to play without any fans in the stadium. This is the second straight match in Korea’s Group H schedule that the team has had to play in an empty stadium.

Led by head coach Paulo Bento, Team Korea started the match with a 4-2-3-1 formation. After the two teams failed to score goals in the first half, Bento switched things up, substituting players for a more aggressive strategy.

Once the second half started, Hwang Hee-chan, Kim Shin-wook and Lee Kang-in were substituted on. However, the team struggled to score as it got stuck in Lebanon’s defense and failed to overcome the poor ground conditions.

Rather than training at the stadium where the match was held, Korea set up its base camp in Abu Dhabi, the United Arab Emirates, and trained there. Korea skipped its practice at Camille Chamoun Sports City Stadium.

Not being able to practice on the pitch could have affected the players, but Bento made it clear that the result had nothing to do with that.

“It’d be a lame excuse to say we didn’t get the result because we didn’t train at this stadium beforehand.” Bento said at his post-match press conference. “We just didn’t play well today. In particular, we were worse in the second half than we’d have liked, and we didn’t get the result we wanted. We tried to penetrate up the middle, but it didn’t work out. We have to be better.”

“I understand that fans wouldn’t be satisfied with our recent results,” Bento was quoted as saying. “We have to keep working on regaining our form. But we’re still in first place in our group.”

Korea wasn’t able to see the result the fans wanted, but it was able to maintain the top spot in the Group H standing. With a draw, Korea added a point in the Group H standing. Korea has now picked up two wins and two draws, totaling eight points. A win could have been a great opportunity for Korea to extend its lead, but a draw still gave way for the Taeguk Warriors to take a one-point lead.

Before South Korea’s match against Lebanon, it had the same win-loss and points record in Group H with North Korea. South Korea was the leader as it was ahead in goals scored. However, as North Korea suffered a 1-3 loss to Turkmenistan, South Korea was able to extend its lead.

Although South Korea has the lead, it is not in a position to be relieved yet, as it is only one point ahead of Lebanon.

Looking at South Korea’s recent performance, it hasn’t been too successful. Last month, South Korea headed to North Korea and played to a scoreless draw, and this month, it once again failed to score goals. Despite the team’s scoreless streak, Bento didn’t seem too discouraged about the team’s performance.

“We haven’t scored for two matches, but we’ve also not given up any goals so far,” Bento was quoted as saying. “I think it’s positive that we kept our opponents off the board in a difficult match like today’s.”

With Thursday’s match finished, South Korea will take a break from the Group H Asian qualifying schedule. Their next Group H match will be against Turkmenistan on March 26, 2020. South Korea is scheduled to play its final group match on June 9, 2020, against Lebanon.

After the match, South Korea headed back to Abu Dhabi. Before heading back to South Korea, the team will play a friendly match against third-ranked Brazil on Nov. 19.