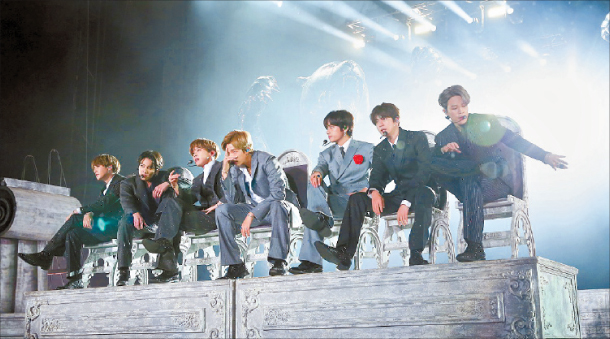 K-pop sensation BTS’s “Love Yourself: Speak Yourself” world stadium tour, which wrapped up in Seoul last month, was reported on Friday to have reaped over 136 billion won ($117 million) by selling a total of over 976,000 tickets.
The data was compiled from Billboard Boxscore, which releases reports on the profits made from international music festivals and tours. It is estimated that the group sold about 49,000 tickets per show and their average revenue per concert is believed to be $5.8 million.
Over the course of the world tour, which kicked off in May, the septet performed 20 shows in 10 different cities in South America, North America, Europe, Asia and the Middle East.
According to Billboard, if ticket revenues are added to sales made from tour merchandise and profits from online live streaming, the total is estimated to be near 200 billion won.