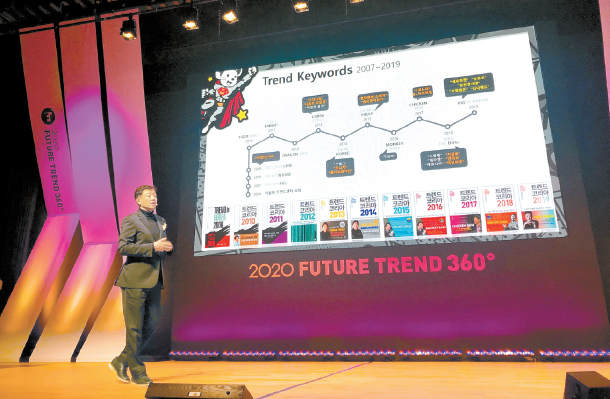 Multiple personalities, in a good way, is one of the biggest coming trends, as is fairness and self-development.

These are some of the 10 key phenomena noted by the Kim Ran-do, a consumer studies professor at Seoul National University and author of “Trend Korea 2020.”

Unlike in the past, it has become natural for individuals to have a number of distinct identities. Instead of seeing this as a sickness, people now embrace different behaviors and thoughts depending on where they are — whether work, school or home.

According to Kim, people change their identities at least 10 times a day. The change has been driven by social media and the growing importance of seeing themselves as an individual rather than as part of a group.

“In the past, people described themselves as a part of an organization, like family, work or school,” said Kim at 2020 Future Trend 360° held at Coex in Gangnam District, southern Seoul, on Friday. “But in the nomadic society, where people are open to moving places for new experiences, they now introduce themselves as an individual based on their desires. The use of multiple social network platforms, like Instagram, Facebook and Twitter, also affected people to develop different identities. They use different platforms to express different parts of themselves.”

Kim gave a talk at the event that was hosted by Coex, aT Center and Changwon Exhibition Convention Center. The speech was largely based on “Trend Korea 2020,” which Kim wrote with a Seoul National University consumer analysis center.

“In the streaming era, companies now sell relationships to consumers. People don’t sign off from using a music platform just because they listened to the music less that month than in the previous month.”

Kim explained they only disconnect if they have a bad experience with a service.

Kim also noted the growing influence of younger people in the decisions of older consumers.

Many parents now get advice from children, who frequently access trends through social media. This is in contrast to the past, when the purchasing decisions of the young were largely affected by their parents,.

“That’s why seniors today look and act much younger than seniors in the past.”