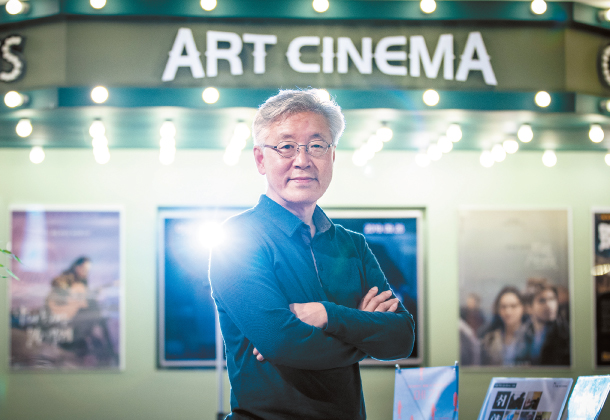 Tak Moo-Kwon, 62, CEO of The Forest Art Cinema and Nowon Bookstore, talks about his 25-year journey during a recent interview with JoongAng Ilbo. [KWEN HYEK-JAE]

If you missed the chance to catch that independent movie that had caught your eye, fear not — an art cinema in Nowon District, northern Seoul, shows nearly 10 small-scale movies a day, so you’ll have plenty of options to fit your schedule.

The Forest Art Cinema is not only a theater but also a multiplex cultural space. Although it only has two movie screens with 40 seats each, it has abundant experience organizing film review programs and some events that allow the audience to have discussions with film directors and actors.

But that’s still not all it offers. The Forest Art Cinema is also a book cafe, book store and free art gallery that showcases rising new writers. Also, the cinema frequently plays host to indie bands, public reading events and literature lectures. On Saturdays, the cinema becomes Nowon Seodang, a learning space that provides students with teachings on the “Analects of Confucius” and “Myeongsim Bogam,” a book written to teach ethics to children in the 14th century Joseon Dynasty (1392-1910).

Tak Moo-Kwon, 62, CEO of the Forest Art Cinema, is probably better known for his successful chain of Nowon Bookstores. He didn’t have any social experience after getting kicked out of school, but because he knew a little about books, he decided to open his first bookstore in Sanggye-dong, Nowon District, in 1994.

Tak’s business has been growing steadily since, and he’s now the CEO of a total of eight bookstores throughout Seoul. Although Tak started the business for money, he hasn’t forgotten his conviction that he would do something to give back to the community while running his bookstores.

Tak said he owes his success to his parent’s teaching at the dinner table.

“My parents defected from North Korea in 1946,” Tak said. “People who defected to South Korea are usually very conservative, but my father always talked about his critical view on society.”

Tak also joined a democratic movement while he was studying in the department of history at Sungkyunkwan University in central Seoul.

“I felt sorry for my colleagues who were still participating in democratic movements at the time. After opening my bookstore, I promised myself that I would donate some money in the future,” said Tak.

Tak has previously been and is currently involved in several social organizations including the Isang Yun Peace Foundation, the Hankyoreh Foundation for Reunification and Culture and the Korea Sustainability Investing Forum.

Once Tak’s business was settled, he started to consider doing some social work at his bookstores. He established the Nowon Seodang learning space 10 years ago and opened The Forest Art Cinema seven years later, which is the first of its kind in Nowon District.

He is also responsible for choosing some of the films that allow for audience discussion about ongoing social issues and invites writers and directors to participate in those discussions.

“A movie is just a tool, the key point is the discussions it makes people have after watching it,” said Tak.

The Forest Art Cinema, which started with only one movie screen, expanded to two screens last year. The audience numbers have been gradually growing, and its average rate of seat sales increased by some 30 percent over the past three years.

Not only that, the cinema occasionally screens several mainstream movies as well. One such example was the film “Herstory” (2017). Due to a lack of commercial success, nearby theaters stopped showing the movie just five days after its release, but The Forest Art Cinema started to play it for those who missed the chance to see it.

On Aug. 14 last year, the cinema held a special event with director Min Kyu-dong and the main actress Kim Hee-ae of “Herstory” to celebrate the International Memorial Day for Comfort Women, the day remembering Korean women forced into sexual slavery during World War II. The seats for this event were all sold out, and the audience was the largest in the cinema’s history.

“My goal is to spread this kind of cultural space in every area so that it can be a social phenomenon in the future,” said Tak.

“I’m dreaming of my business to be a form of financial institution at a social level. For instance, the existing financial institutions lend people an umbrella and take it back when it stops raining. This kind of system rather polarizes the rich and poor. I’m planning to come up with a system through which I can provide people in need with something that they actually need. A program we are currently running is one example of such; it allows artists to travel to foreign countries. I bought a house in Budapest, Hungary, and allow the artists to stay there for about one or two months for free. Author Pyo Myung-hee was the first who participated in this program. The novel “A Refugee One Day” (2018) that she wrote during her stay in Budapest became a steady seller. I’m looking for a house in Berlin, Germany, too,” said Tak.

As one of his life goals, Tak picked walking along the Camino de Santiago pilgrimage route. He said he tries to walk about 15,000 steps every day to achieve his dream of walking the route next year.