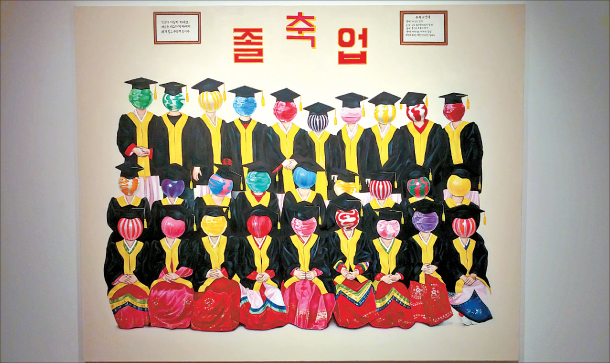 “7 Years Old” (2017) by Jin Hyo-seon is a painting that has faces of kindergarten children replaced with lollipops, symbolizing that we start lying when we enter a new community. [YOON SO-YEON]

Some people do it so much that sometimes they fail to realize that they’re even doing it, but after visiting the “Ordinary Lie” exhibition now being held at the Seoul Museum in central Seoul, the concept of lying may come across in a different light.

“Lying began perhaps at the beginning of humankind,” said Rhyu Im-sang, curator and the head of development at Seoul Museum. “Our lives are full of lying, but the effects it has on me and the relationships around me are often overlooked in our daily lives. Through the exhibition, we think about what lying truly is, and how the things we believed were true were actually lies.”

The exhibition takes on quite a straightforward tone, and the works are easy to grasp at first sight.

For instance, “7 Years Old” (2017) by Jin Hyo-seon is a painting that is a parody of a typical kindergarten graduation photograph taken in Korea, in which children sit in line while wearing the same uniform. The message delivered with the faces of the children replaced with lollipops is quite clear: as soon as we enter into a social system, we learn to lie.

Other works such as “One Day” (2017) by Eom Ikk Hoon and the Disney parody series by Rodolfo Loaiza are similarly straightforward with their powerful messages of lying and deception.

Yet, other works sometimes require more thought, such as with Song Yoo-jeong and her installations, “Repetition of Emotions” (2015). In Song’s work, you see white frowning faces of a person, with just one face in the middle painted yellow. The faces all look similar, but each has very subtle differences that are visible to the most delicate observations.

“When someone asks us how we’re feeling, we usually describe ourselves with one single word, like good, bad or fine. But if we look closer, our emotions aren’t just one single entity that we can easily define. We can be happy, sad and confused all at the same time. It’s a work that tells us that we need to look deeply into ourselves to understand all those feelings,” said Rhyu.