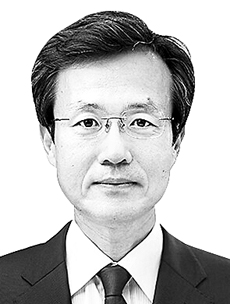 Jeong Sang-don
The author is a visiting professor at the Graduate School of Politics, Government and Communication in Hankuk University of Foreign Studies.

I choke up whenever I read the work of a certain progressive poet who expresses the pain and sorrow of laborers. I go speechless. But that’s it. On every issue, the pain and sorrow suddenly morphs into a language that instigates protest, suggesting that the world has never changed in the absence of the public’s armed struggles.

Ten years ago, the poet called the U.S. military base in Pyeongtaek, Gyeonggi, a “war base of Northeast Asia” and said that the beautiful community of Daechu-ri should not be replaced with a “multinational war machine.” Now, I want to ask him if he feels the same even as North Korea is threatening the South with nuclear weapons.

The geopolitical location of the divided Korean Peninsula requires a principle that serves national interest, as well as the diplomatic and security policies of practicality. We need to address their progressive perspectives toward North Korea because their thoughts are what trigger conflict within South Korea and can affect inter-Korean relations.

In Europe, student protests in 1968 paved the way for New Left politics and sparked a leftist revolution. Against the backdrop was a spirit of criticism. The New Left did not acknowledge the legitimacy of Soviet socialism and instead denounced it for structurally suppressing the emancipation of laborers. Neither did it see North Korea as a socialist state because it is controlled by a monolithic system that deifies its leader. Marxist historical materialism sees North Korea as a more urgent subject to overcome than capitalism. 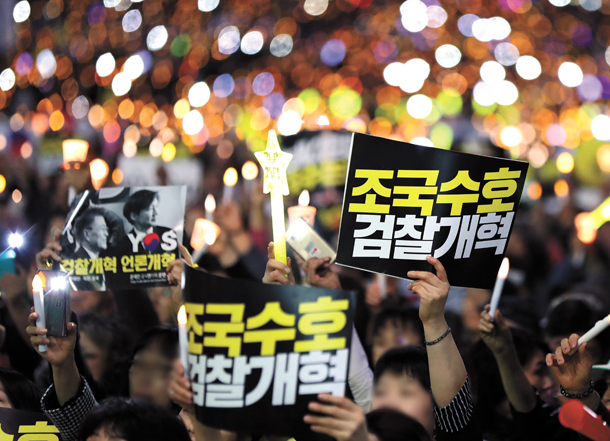 A group of self-proclaimed Korean liberals hold a candlelight vigil in front of the Supreme Prosecutors’ Office in southern Seoul on Oct. 12 to show their support for former Justice Minister Cho Kuk and prosecutorial reforms. [YONHAP]

North Korea is a colossal prison. People who get caught watching South Korean dramas can get executed. Yet South Korean leftists keep silent about North Korea’s human rights violations. Before Germany was reunified, West Germany did not keep silent about the human rights situation of East Germany. South Korean leftists would want to claim that they are “strategically” remaining mum about the issue so as not to damage South-North ties, but international society does not understand this standpoint.

Human rights are the most important value for progressives. What point would an improvement in inter-Korean relations make if they ignore human rights? It is foolish to hope for North Korea to become a normal state by acquiescing the regime’s abnormal behaviors. If South Korea hopes for the normalization of its ties with North Korea, it should first check whether inter-Korean activities fall within the universal standards of international community.

South Korean progressives defend the North and speak on the regime’s behalf without mentioning anything about Pyongyang’s malicious threats and derogatory comments. If someone criticizes the North in South Korea, they are treated as part of the far-right. From the perspective of European leftists who examine themselves through a critical mind to find an alternative to a failed socialist model, South Korean leftists are unfathomably anachronistic. That clearly shows how immature they are.

In terms of political development, South Korean progressivism is not playing its role as a genuine social solution. The liberals refuse to communicate with members of the public that think differently. I have never seen Korean progressives play a role in resolving ideological conflict, even after they were oppressed for their views in the past.

During the pro-democracy movements of the 1970s and ‘80s, progressives sacrificed their lives for their values. But they showed nothing but calculative moves during the recent Cho Kuk scandal. It may benefit them in the short run, but in the longer run, they are suicidal.
It’s like Korean progressives are shelled in their own world, unable to see all the changes in the rest of the world. Are Korean progressives really progressive?