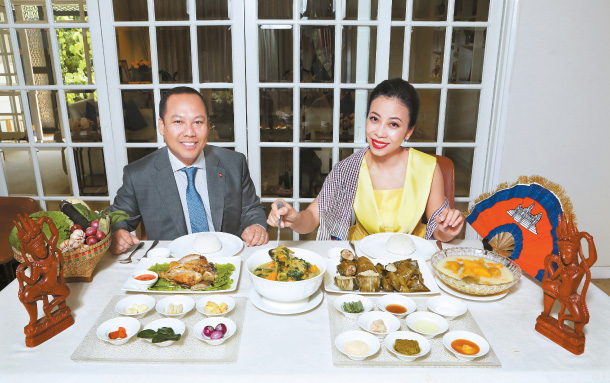 Cambodian Ambassador to Korea Long Dimanche, left, and his wife Nhim Davy, right, present signature and classic dishes from Cambodia and the ingredients commonly used in their cooking at their residence in central Seoul on Oct. 21. [PARK SANG-MOON]

There’s a story behind how Cambodia’s one hundred vegetable soup came to have a new name.

“We call this soup Samla Kako ? it’s one of the classic dishes enjoyed at homes in Cambodia,” said Cambodian Ambassador to Korea Long Dimanche. “It used to be called hundred vegetable soup because of the variety of ingredients that go into it.”

The story goes like this. Once upon a time in Cambodia, the son of the king traveled to a forest and got lost. He stumbled upon a house in the woods, which was kept by a family of three: a father, mother and daughter. The family helped the prince rest and the daughter made some soup for him.

“It’s not hard to tell where the story goes from here,” said Nhim Davy, wife of the ambassador. “The prince fell in love. He went back to the kingdom, told the king and queen about the girl, and returned to the house in the woods to ask the family for her hand in marriage.”

This time the king and the queen accompanied the prince. The father of the bride then made the soup for the king and queen. But upon tasting his first spoonful, the king said that there was something amiss.

“He walked around the house to find something,” Nhim said. “He found a few grains of rice, which he then asked the father of the bride to toast and grind and add into the soup. That leads to this mushy texture.”

The king loved the soup with the new ingredient.

“He decided to call it Samla Kako, which means ‘stirring soup’ in Khmer,” Long said. “The soup can be easily made in Korea because the markets here have all the ingredients it needs.”

Gathered around a table full of dishes from their home country, Ambassador Long and Nhim told their stories about the Cambodian mindset when it comes to love stories, marriages, families and businesses, and what that all means for the bilateral relations, especially in light of the upcoming Asean summit hosted in Busan next week.

Q. Tell us about the dishes prepared today. Which of their characteristics is particularly Cambodian?

A. Nhim Davy: In addition to the soup, we prepared roasted chicken with banana flowers ? you will see a lot of chicken and fish used in our cuisine. And we have here with us a very traditional dessert ? sticky rice cake with different ingredients inside, in our case, bananas or beans. You will only see this dessert during special occasions in Cambodia such as during the New Year or Thanksgiving, or in weddings. Our New Year holidays are held in April, by the way.

Long Dimanche: Just as Koreans have the tradition of families getting together and making rice cake dessert for the Chuseok (harvest) holiday, in Cambodia, families get together and prepare this dessert together. And as some Koreans during the holidays prepare food for their ancestors, Cambodians also make food together and take them to a temple nearby to offer them to the monks, so that the monks can pass them on to our ancestors. 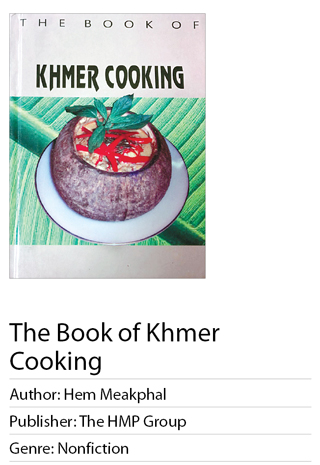 “The Book of Khmer Cooking” by Hem Meakphal introduces classic Cambodian dishes especially for foreign readers. The author arranged the recipes after speaking with a number of cooks in Cambodia and presents them with photos of key ingredients and herbs, as well as basic recipes for different types of kroeung, or spice and herb pastes that are used as base flavors in many Cambodian dishes.

This is your third year in Korea. Comparing the culinary characteristics of the two countries, what do you think is one of the starkest differences?

Long: Cambodians consume a lot of fish in general and freshwater fish especially. I saw one study that said on average one Cambodian consumes 36 to 37 kilograms (79 to 81 pounds) of fish annually. That may be similar to how much kimchi one Korean person consumes yearly.

Nhim: The culinary characteristics vary by each region in Cambodia. For instance, in western areas of the country, there are noodle dishes that are sweeter and use more crushed peanuts in their cooking, as part of the influence from Thailand, bordering Cambodia on the western side. If you go to the northern areas, you will experience cuisines that have influences from Laos. But most Cambodian food in general is not too sweet or spicy and does not consist of coconut milk. We like to take sauces on the side ? like fish sauce with chilly peppers ? for those who prefer the spiciness.

Of all the cookbooks about Cambodia, how did you come to choose “The Book of Khmer Cooking” by Hem Meakphal to recommend to the readers?

Long: The book offers detailed information about the main ingredients in Cambodian dishes that are unique to the country. There are not too many books that offer this detail especially in English.

Have you hosted cooking events with Cambodian communities?
Long: Of course, numerous times. We have quite a number of marriages between Cambodian nationals and Koreans. Our records say there are around 8,000 couples in Korea today and the number is increasing. We see this as one of the examples of people-to-people exchanges between Cambodia and Korea. Strengthening bilateral relations cannot be done single-handedly at the government level.

Nhim: As we get together with these communities in Korea, the embassy is also trying to get more of these international families to continue to teach their children the Khmer language, because it’s so easy for the children to pick up Korean and forget their mother tongue as they grow up here.

The Asean summit is just around the corner in Korea. What are the objectives and goals of the Cambodian government for the summit?

Long: There will be two summits ? the Asean-Korea summit and the Mekong-Korea summit. The Mekong summit will involve Cambodia, Laos, Myanmar, Thailand and Vietnam. The summits will be occasions to review what we have done together for the past 30 years and to lay out our vision on how to cooperate and strengthen the relationship between the two regions.

Korea is the second largest partner in trade for Asean, for instance, and Asean is the top tourist destination for Koreans. I believe that there is much potential for the two regions.

President Moon Jae-in during his visit to Cambodia in March emphasized growing Korean investment in Cambodia. What are some niche markets in Cambodia that may be fit for Korean companies to invest in?

Long: Our diplomatic ties date back to 1997, and the Korean private sector has been present in Cambodia for more than two decades. They started in the agriculture sector and expanded to construction, spare parts and the automotive sector. We can see that the investment has not progressed up to our hopes and would like to invite the Korean private sector to invest more, especially in the agricultural sector and in infrastructure development.

When it comes to agricultural products, the Cambodian and Korean governments have been working hard in negotiations regarding mango exports from Cambodia to Korea. Our hope is that we will see Cambodian mangoes in the Korean market by the end of this year.

We would also like to encourage Korean investors to consider setting up agro-industrial businesses in Cambodia, to use the raw material in Cambodia to manufacture products to import into Korea.

Where in Cambodia would you recommend visitors go see for more off-the-beaten-road tourism, in addition to the well-known Angkor Wat Temple and other heritage sites?

Long: We have a lot of sites in Cambodia known for eco-tourism. The jungles in Cambodia are not like those that can be found in Korea ? you will have to find out in person. We have pristine beaches and great islands along the coastline. We are home to a lot of species near extinction. One of them was the Mekong River Dolphins, which recently surged in numbers for the first time in decades.

Have you noticed any similarities between Cambodian and Korean customs?

Nhim: The way people respect each other is very similar. In Cambodia we have different levels of bowing and greeting that we do to show respect to those older than us. I saw how young people in Korea respect their elders and thought that it was interesting that we have such similar traditions.

Long: Cambodians like to get together after work with colleagues and coworkers, similar to how Koreans hold hoesik (gathering among coworkers, usually after work in Korea). It’s a way to form good camaraderie among people that you work with, and I saw the same mechanism at work here. 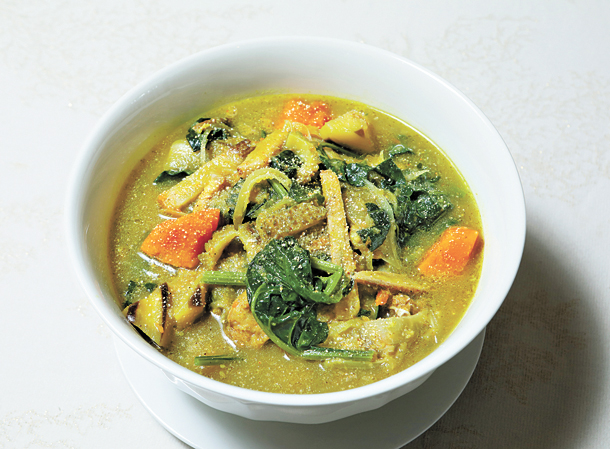 1. Prepare the kroeung (refer to recipe online). Prepare 300 grams (10 ounces) of fish of your choice (we used chhlang fish) by cutting it into slices.

2. Prepare leaves of angkeadei, m’rum and m’reah, about four stems each, and wash and place in a bowl.

3. Fry the kroeung and 1 tablespoon of prahok (Cambodian fish paste) in oil in a large pot over medium-low heat. When the aroma intensifies, add the fish, 1 teaspoon of salt and sugar and 4 cups of water. Allow the fish to cook for about 5 minutes and add 400 grams of vegetables of your choice, thinly sliced (we used green papaya, banana and jack fruit, pumpkin, eggplant and green beans).

4. Roast 3 tablespoons of rice, then grind. Add to the soup. Bring the heat to medium-high. When the soup boils, add 2 tablespoons of fish sauce and put the leaves in. Remove from heat and serve. 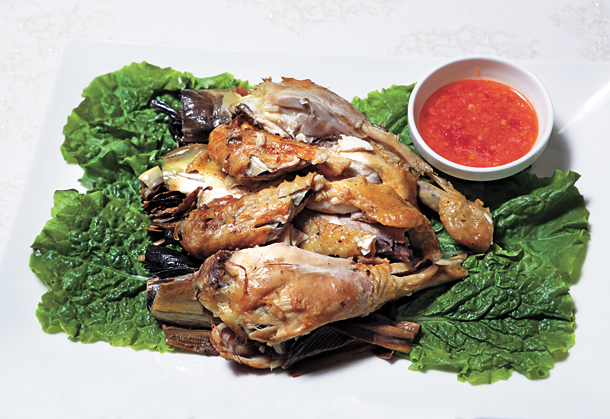 1. Prepare 1 whole chicken. Remove the giblets inside the chicken and rinse it inside and out. Pat the chicken with paper towels. Place the chicken in a large oven-safe dish.

3. Pour about 2 cups of oil into a wok at a medium heat. Place two banana flowers, halved, into the wok and add the chicken. Place a cover on the wok and let the meat cook thoroughly. Check on the chicken and once the meat is cooked through, remove from heat and serve with a dipping sauce. 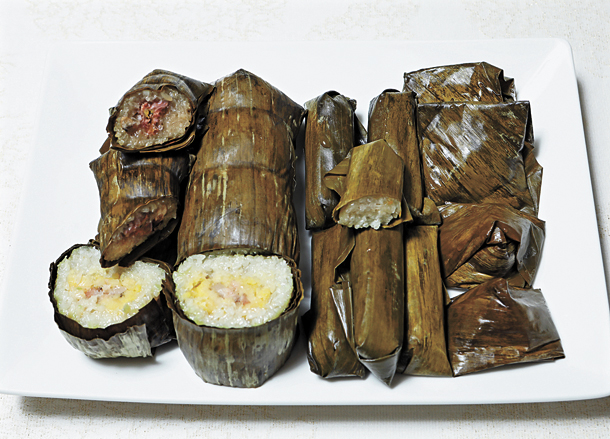 3. Prepare a dozen bananas, by peeling and halving them. Add them to the bowl with the sticky rice and carefully coat each piece with the rice.

5. Roll up the leaves and use string to tie it in the middle. Fold in both ends and tie them as well. Repeat for all banana pieces.

6. Boil the leaf rolls in water for 2 hours. Cool and serve.