Samsung finally gets a labor union

Samsung finally gets a labor union 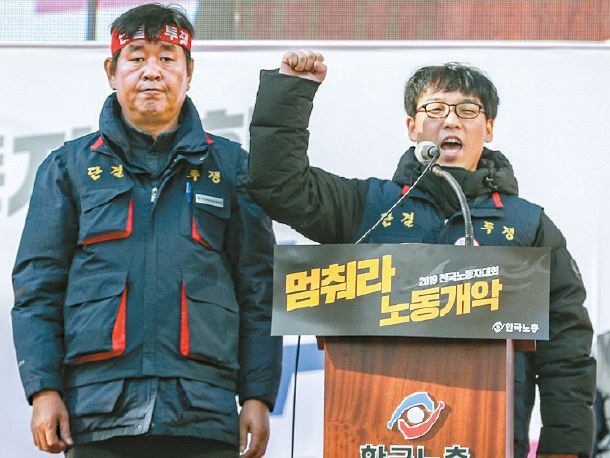 Samsung Electronics’ 50 years without a labor union essentially came to an end Saturday as the company’s first union under a major umbrella union was launched.

While there were three small unions formed since Samsung Electronics was established in 1969, none were part of the two major umbrella union groups in Korea: the Federation of Korean Trade Unions (FKTU) and the Korean Confederation of Trade Unions.

The fourth union for Samsung Electronics is backed by the FKTU, which will be involved in wage negotiations with management and in organizing rallies for demands.

The union earned official approval Wednesday after submitting an establishment application to the Ministry of Employment and Labor two days earlier.

On Saturday, the union officially announced its launch at the FKTU office in Yeouido, western Seoul.

Samsung Electronics, the major powerhouse of Korea’s leading conglomerate, Samsung Group, has been criticized in the past by labor activists and liberal politicians for its treatment of workers desiring to unionize.

“Samsung Electronics has successfully grown from feeding on its laborers’ blood, sweat and tears,” said Jin Yoon-suk, the first chairman of Samsung’s labor union during the launch event, according to a FKTU statement.

“But the company credited all of its success to its management’s vision and managerial ability and enjoyed all of the accomplishments among themselves.”

Jin said the union was needed for Samsung Electronics workers as the company encouraged unhealthy competition among workers while forcibly implementing a toxic workplace culture.

The foremost tasks for the new union, he said, are to set clear standards for wages and performance-based bonuses, abolish the hierarchical workplace culture and put an end to sudden layoffs.

“While they were celebrating, we, who put deadlines before our physical well-being, were dying of unknown causes, [and some] even had to leave the company after suffering harsh working conditions and unfair treatment from management,” he said.

To encourage membership, the union is holding rallies at six of the company’s factories across the country starting Monday afternoon.

The union wants to have more than 10,000 registered members. When the count reaches a certain level, the union plans to officially request negotiations on wage levels and working conditions to management.

Although the union did not officially reveal its current number of members, it is believed that more than 500 Samsung Electronics employees have joined.

The union also plans to encourage and assist with union efforts for Samsung Electronics’ partner companies.