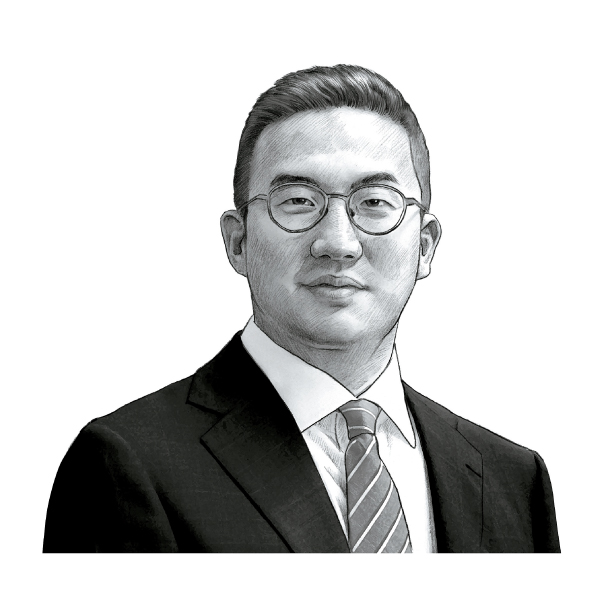 Koo Kwang-mo, the 41-year-old chairman of LG Corp, has been leading 220,000 staff and executives at home and abroad for one year and five months. The industry was surprised that such a young person took the helm, but LG sources say that the company’s much-needed transformation has started.

“March forward with determination that there will be no future if we fail to respond properly and swiftly in the face of an unprecedented crisis,” said Koo, at a president-level workshop last September.

Given the state of the company, the pep talk was much needed.

The mobile communications (MC) division of LG Electronics, 33.7 percent owned by LG Corp, which makes and sells smartphones, has been losing money for 18 consecutive months. This year alone, it has accumulated a deficit of 350 billion won ($300 million).

The sense of urgency is growing as future businesses, such as LG Chem’s next-generation car battery and LG Display’s OLED TV panel, are struggling. They were supposed to be the source of future growth.

LG Display has been challenged by a tsunami of low-cost of LCD panels from Chinese companies, while China’s CATL has already assumed the top place in the lectric car battery field. 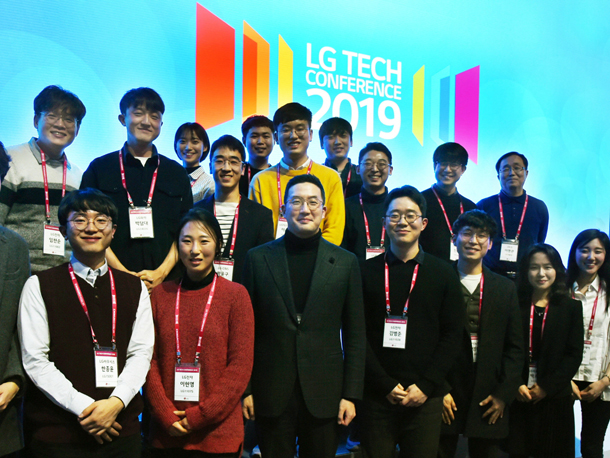 Amidst the crisis, chairman Koo strongly felt something was wrong, as capable employees kept leaving the company. His goal was to get talented minds to knock on the door of LG by themselves.

After Koo became chairman, his first trip was to San Francisco, right next to Silicon Valley. Holding this year’s second LG Tech Conference on the site, he himself recruited applicants seeking master’s or doctorates in the sciences.

While pursing his MBA at Stanford, he moved to Silicon Valley and built experience at a start-up until 2009.

“Koo’s main concern is whether the best people will come to LG instead of Amazon or Google, and he aims to change the company [to be attractive] enough for them,” said an executive of LG Corp.

In the world where simple code instead of parts can install functions in LG’s washing machines, LG needs to become more flexible and practical if it wants world-class developers and engineers to work for the company.

As LG Chem’s production lines were spread across non-metropolitan areas such as Ochang in North Chungcheong and Daedeok District in Daejeon, it was virtually impossible for employees who worked more than 10 years to work at an office in Seoul. Strict hierarchy was another cause for young engineers’ lack of motivation.

LG Display has an obsolete corporate culture that runs like a conveyer belt. Even the managers vented their frustration on an app called Blind, where office workers can post complaints anonymously.

By offering early retirement to 25 percent of its executives, LG is seeking a complete overhaul.

From inside and outside the company, LG Science Park in Magok-dong, western Seoul, where employees can wear whatever they want, such as T-shirts without any concerns over hierarchy, is seen as the blueprint of LG’s future under Koo’s leadership.

LG Science Park was launched last April before Koo became chairman, but with the exception of his office, it is the place where Koo invests most of his time.

The most distinguishing characteristic of LG Science Park is that it provides office space not only to LG affiliates but also to promising start-ups. In fact, it was at LG Science Park, not LG Twin Towers in Yeouido, western Seoul, where Koo delivered his first New Year’s speech as chairman.

“For LG to become the most beloved company from our customers and the society, technology is most important. I hope you can commit your dream and passion to LG’s mission of inspiring our customers by changing their lives [with technology],” said Koo at the start of the LG Tech Conference held this February.

On top of changing corporate culture, the company is striving to bring changes to small details. During the LG Tech Conference held at LG Science Park in Magok-dong last February, Koo shook hands and took photos with each and every one of 350 science research and development (R&D) personnel.

After becoming chairman, Koo was clearly sending the message that he cares for R&D in the field. In the previous year, LG simply rented a hotel in Seoul to hold the same event.

LG’s so-called business briefing session, which has been held for 30 years since 1989 by late founder Koo Ja-kyung, was quite different for this year after Koo took charge.

Previously, the session was a formality, with CEOs and CFOs of each affiliate reporting to the holding company. However, Koo prefers to have casual discussions with C-level executives on that year’s sales and the following year’s business strategy

Also, Koo is known for cutting to the chase rather than getting reports from A to Z. For example, he prefers to have debate on the company’s engine for future growth such as LG Electronics’ OLED TV strategy.

Last April, when LG Electronics moved its smartphone production line in Pyeongtaek, Gyeonggi, to Vietnam, Koo made a swift decision. Executives of LG Electronics were later known to have been taken by surprise by Koo’s call. The decision was significant in that Koo took into account what would work best to revitalize the company’s smartphone business rather than how the company’s move overseas would look from the outside.

“Chairman Koo focused on customer values and protected the essence of its business, which is profit,” said an executive of LG Electronics.

A reshuffle of that sort would have been impossible in LG in the past, which emphasizes humanism. From inside and outside the company, many believe Koo made the judgement that a shakeup cannot wait any longer.

In fact, LG Corp liquidated 60 percent of its Serveone shares gaining 602 billion won in the process.

Jeong Ho-young, the newly appointed CEO of LG Display, is known for his talent with numbers, even giving out a presentation on company sales by memorizing every important figures.

LG U+ ditching its Payment Gateway (PG) business to money transfer app Toss at a relatively low price of around 200 billion won was LG’s effort to become a new LG.

Of course, the decision was met with skepticism inside the company, with some questioning “Is it really necessary to sell the business to a start-up at a low price?”

Chairman Koo is free from issues involving the corporate governance structure. Koo’s share in LG Corp increased to 15 percent, and the inheritance tax worth 716.1 billion won will be paid off in over the next five years. LG is the first major company to establish a holding company 16 years ago, in 2003.

From inside and outside the company, LG is expected to go all-in on the OLED and battery businesses, which are the company’s core and engine for future growth.

The conclusion was reached that it was inappropriate to hold on to its PG business, which lost competitive edge to Naver. The move was intended to secure funds for new future growth by a swift sell-off, though the move was greatly criticized.

“But Koo, who is practical to his bone, doesn’t really care,” said an anonymous industry source.

In this sense, LG is expected to be more aggressive in marketing when drawing a comparison between its OLED TV and its rival Samsung TV. The electric car battery is also a key business where Koo will remain focused. From inside and outside the industry, the patent dispute between LG Chem and SK Innovation is not expected to end easily.

As a holding company, LG Corp is also gaining attention on how it would unload its 35 percent share of its systems integration affiliate LG CNS. The sell-off is expected bring LG Corp around 1 trillion won.

If the company proceeds with the sale of the LG Beijing Twins Tower on top of the LG CNS share, LG Corp would be able to raise funds of about 3 trillion won, which can facilitate acquisitions.

It remains to be seen what other long-term future engines for growth LG has in mind besides OLED, next-generation car batteries and electric parts for cars.

This is why Koo heeds outside views on consumers and market change via the LG Economic Research Institute. Koo is known for visiting LG Science Park in Magok-dong whenever he has time to check on the status of new developments.

“Koo is both the CEO of the holding company and chairman of the board, but he wishes to focus on large-scale management such as huge investments and new businesses rather than detailed management,” said an anonymous LG official.

Koo felt strongly about the remark of Kim Sang-jo, president Moon’s policy chief who said an “owner should let experts take care of his daily management and rather focus on coordination to bring everyone together and communication to listen to outside interest parties” when he was the chairperson of Fair Trade Commission.

“To facilitate fundamental change required for LG’s growth, presidents themselves must become ‘actors’ to bring the speed of execution to another level,” said Koo at a president-level workshop last September.

LG’s appointments this year are scheduled around Nov. 28, not much different from last year. The industry is paying attention on how fast Koo will transform LG with his own management style.