Fall of Iron Curtain is marked in photo show

Fall of Iron Curtain is marked in photo show 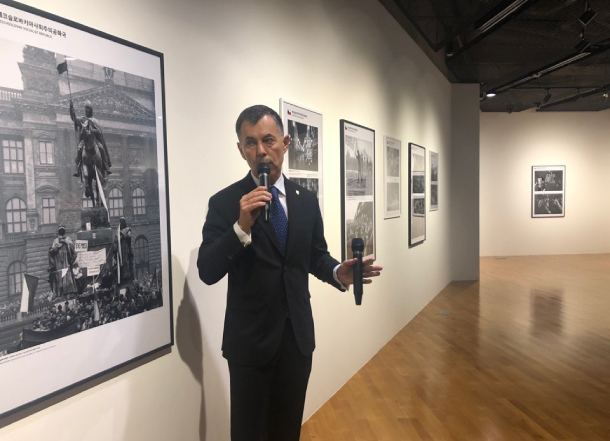 Ambassador of the Czech Republic to Korea Gustav Slamecka explains events depicted in photos at “The Fall of the Iron Curtain” exhibition at the Asan Institute for Policy Studies in central Seoul on Friday. [ESTHER CHUNG]

“Nothing takes forever,” reads a sign hung on a bust of Joseph Stalin in a photo taken in Czechoslovakia in 1989, one of dozens of photos exhibited at the Asan Institute for Policy Studies in central Seoul on Friday in a special exhibition.

“The Fall of the Iron Curtain in Europe was brought about with an extraordinary set of events in central and eastern parts of Europe,” said Jan Kuderjavy, ambassador of Slovakia to Korea, at the opening ceremony of the exhibition on Friday. “People in our countries managed to bring changes to whole systems of governance. By 1989, people in Czechoslovakia had been voicing their wishes to become less dependent on Moscow for at least 20 years. A new wind was blowing from Moscow that year. Sweeping changes were made.”

The exhibition “The Fall of the Iron Curtain” shows 71 photos taken from January to December 1989 in former Eastern Bloc states including Hungary, Poland, Czechoslovakia and Bulgaria as well as in the German Democratic Republic, or East Germany.

It was organized by the Office of the President of the Czech Republic, the Prague Castle Administration, the embassies of Czech Republic, Slovakia, Hungary and Poland and the Asan Institute for Policy Studies. It runs through Dec. 1.

“The exhibition is part of the original one hosted in Prague Castle marking 30 years since the fall of the communist regime, not only in the Czech Republic but in other former socialist bloc countries,” said Gustav Slamecka, ambassador of the Czech Republic to Korea. “I am happy and proud to say that we have brought part of the exhibition to Korea, with the help of my colleagues from the Visegrad Four countries, to share our experiences with Koreans.

“The exhibition is divided by countries, and just by looking at the photos you can see differences in how revolutions were carried out in each country.”

Many of the ambassadors at the opening ceremony had personal recollections about the years leading up to the fall of the Iron Curtain, including the key event, the fall of the Berlin Wall on Nov. 9, 1989.

“If I may add my personal recollection, because we are here in an exhibition brought from the Czech Republic, by the time I experienced unification, I was a German diplomat already,” said Stephan Auer, ambassador of Germany to Korea. “And I remember the moments that year in the German Embassy in Prague. Some 4,500 Eastern Germans had fled and climbed over walls into the German Embassy [in Prague]. The tensions were high until the announcement was made that their evacuation into West Germany was successfully negotiated. I remember the shouts of emotions from the people. It was possible because the Czech government was at the time very courageous to have allowed this to happen.”

Auer emphasized that unification was possible due to efforts by allies and friends.

“There were preconditions to the fall of the wall on Nov. 9, 1989, which include the fact that Western Germany at the time was firmly embedded in the Euro-Atlantic structures, with the European Union and NATO,” Auer said. “We also had the continuous support of our closest allies after the Second World War, in particular the United States of America and the leadership of President George H.W. Bush.

“And we are particularly grateful to our friends in Poland, Hungary, Slovakia and the Czech Republic,” he added. “Because without you, it would have been impossible to reach German unity.”

“I remember when we were in Bratislava [Slovakia], waving our flag at the people in Austria, shouting with joy that we were free,” Slamecka said, pointing at a photo of this moment in the exhibition. “That was an incredible moment.”

Some of the events leading to the fall of the Iron Curtain had close connections with Korea as well.

“When we talk of the fall of the Iron Curtain in Hungary, we have to talk of the Hungarian Revolution in 1956, because it was key to the regime change in 1989,” said Ambassador of Hungary to Korea Mozes Csoma. “And we had nine South Korean students at Yonsei University who followed the developments in Hungary closely and came to volunteer as soldiers to fight in Budapest. We also had a poem written by Korean poet, Kim Chun-su, about the revolution, which he named, ‘The Death of a Girl in Budapest.’”