The Korean women’s doubles team is looking for redemption at the 2020 Tokyo Olympics. 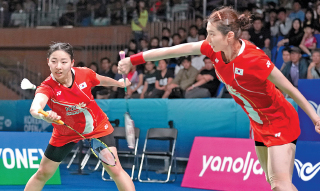 Over the past two years, the Korean badminton team has struggled to live up to expectations as they finished with no medal at the 2018 Asian Games and at the world championship for two straight years.

Traditionally, Korea has been stronger in the doubles event than singles. Up until 2000, the men’s doubles and mixed doubles were considered the best in the world. The women’s doubles teams weren’t as strong, but still won gold at the Olympics back in 1992 and bronze at the 2016 Rio Olympics, Team Korea’s only medal in badminton that year.

Earlier this year, head coach Ahn Jae-chang made some changes to Korea’s two other women’s doubles pairs, mixing them up so that each duo contained a veteran and a rookie. Due to this, the veteran pairing of Chang Ye-na and Jung Kyung-eun was split up.

As a result, Chang is now paired with Kim Hye-rin and Jung is with Baek Ha-na. Chang’s team is ranked 17th while Jung’s team is ranked 19th. Although they had a tough time getting used to the new partnership, they’ve quickly moved into the top-20 in the world ranking.

“Chang Ye-na and Jung Kyung-eun were experienced and had good results at international tournaments,” said Ahn. “But since they’re older, they had minor injuries and were getting out of shape. I thought about it for a long time, and for the Olympics, I’ve separated them and paired them with younger players. Their teamwork keeps on getting better. From them, the other two teams are keeping their nerves up. This is probably the most competitive women’s doubles setup in Korean badminton history.”

The doubles teams’ competitiveness this year has set high expectations for gold in Tokyo.

“When other [Korean] doubles teams win, we all work harder,” said Shin. “Our team is working harder so we can be the doubles team to compete at the Olympics.”

In terms of 2020 Olympic qualification, the teams will be determined based on the BWF ranking as of April 30, 2020. If there are two or more teams from the same country ranked inside the top eight, they can enter two doubles teams.

The Korean Olympic team will likely be competitive regardless of which duo carries the flag. They’ve recently beaten the top-ranked pair of Yuki Fukushima and Sayaka Hirota of Japan, as well other top-ranked teams.