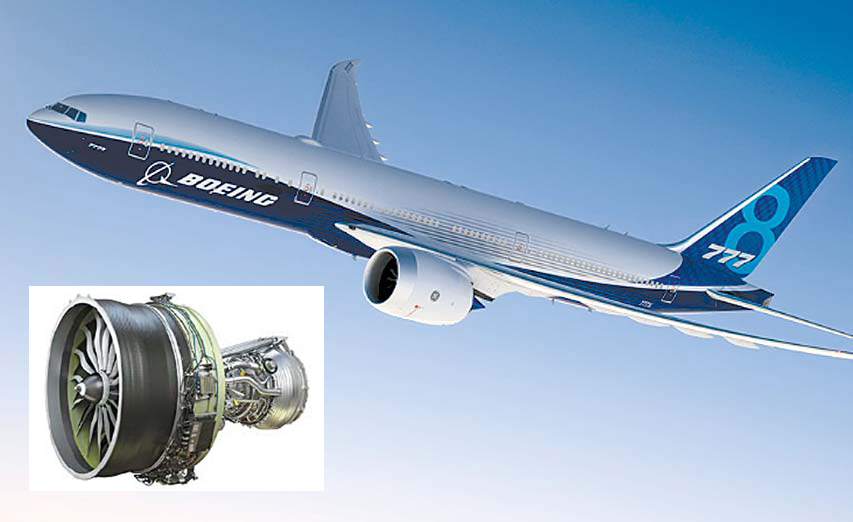 The GE9X engine, inset, the world’s largest turbofan engine, will be used in Boeing’s 777X airplane, which is currently under development. Under the new deal, Hanwha Aerospace will supply six parts, including a high pressure compressor and turbine cases, for the engine until 2024. [HANWHA AEROSPACE]

Hanwha Aerospace has signed a $300-million deal with GE Aviation to supply aircraft engine parts, the company announced in a statement on Monday.

Hanwha will supply 46 core parts for GE Aviation’s engines, including the GE9X and LEAP engines.

The GE9X engine is the world’s largest turbofan engine, designed for the Boeing 777X, which has been under development since 2012. The LEAP engine, for the Airbus A320neo, is mainly used on single-aisle aircraft.

“The involvement of a smart factory in Changwon, [South Gyeongsang], the first of its kind in Korea, and a factory in Vietnam, which started operation last year, for the production of [GE’s] engine parts means we earned the nod for our manufacturing competitiveness in the global scale,” Hanwha said in a written statement.

Hanwha said the latest deal added its total receivables from contracts over the past five years to stand at some $20.1 billion. Its partners also include U.S. aerospace manufacturer Pratt & Whitney and Britain-based Rolls-Royce, which it signed a 1.2-trillion-won ($1.1-billion) deal with earlier this month.