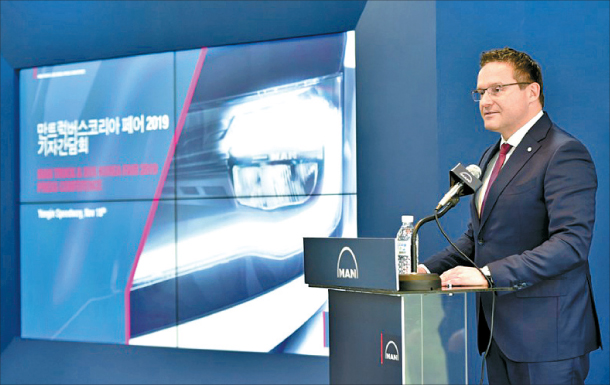 YONGIN, Gyeonggi - MAN Truck & Bus Korea is focused on improving its maintenance and after sales services after a series of issues left it facing complaints and lawsuits earlier this year.

The Korean unit of the German commercial vehicle manufacturer said on Monday, the last day of its three-day-long annual fair held in Yongin, that it plans to open new maintenance centers and launch new models next year to improve its connection with customers.

“Korea has always been one of our key markets,” said Thilo Halter, head of the Asia-Pacific region for MAN Truck & Bus. “As we always have, the German headquarters, Asia-Pacific headquarters and the Korean unit will closely communicate to ensure we provide high quality service for local consumers.”

Within the first half of next year, the commercial automaker is opening five new engine-dedicated service centers for better and faster maintenance. It is also moving and expanding its distribution center to Yeongdong County, North Chungcheong, to ensure all parts can be delivered within four hours throughout Korea.

Improving customer satisfaction on maintenance and product quality has been a key initiative for MAN Truck & Bus Korea recently, after multiple trucks in Korea were found to have faulty cooling hoses within the last year. Some drivers also reported rusting engines and transmissions that shifted into neutral on their own, and the company was faced with a series of lawsuits from MAN truck owners.

As damage control, the German automaker announced in early May it would offer seven-year or one-million-kilometer (621,371-mile) warranties on its vehicles with faulty cooling hoses and engines, which was later officially launched under the name “Care+ 7.” MAN Truck & Bus also recalled 1,191 dump trucks across four models with faulty parts.

Unexpected gear shifting and rusting engines were not included in the program, as the owners who made those complaints did not ask for them to be, the company said.

As there have been no additional reports of quality issues since then, Burger said the company believes it is on the right track to regaining consumer trust.

The company said it is preparing to launch a new truck series with improved engines that passed the Euro 6d emissions standards test.

After launching in Korea in 2001, the local unit reached the milestone of selling 10,000 trucks earlier this year.

It also sold more than 100 two-story buses while growing an average of 15 percent per year between 2002, the year it sold its first truck, and 2018.