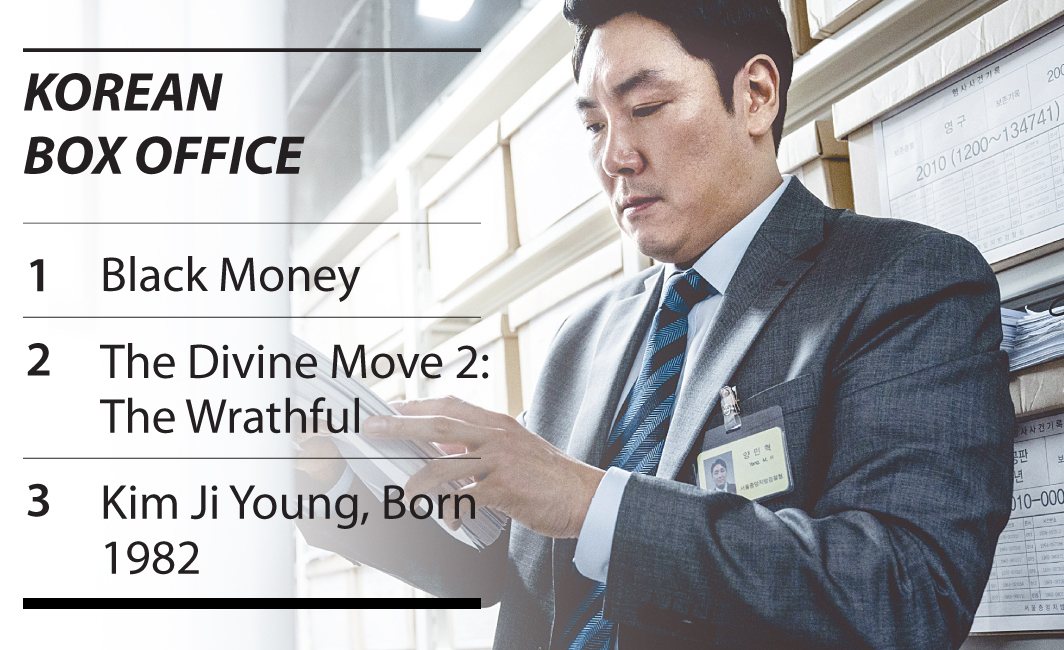 Local film “Black Money” was quick to hit No. 1 for the first and likely last time at the weekend box office before the highly anticipated “Frozen 2” hits local theaters this week.

“Black Money” reached the top spot after selling 781,000 tickets at 1,117 screenings over the weekend. Featuring well-known actors Cho Jin-woong and Lee Ha-nee, the story revolves around the prosecutor Yang Min-hyuk (played by Cho), who is notorious for causing riffraff in his cases. When his stubborn ways land him in major trouble after he is wrongly accused of being behind his suspect’s suicide, he must do whatever he can to prove his innocence, and while doing his research, he eventually ends up having to resolve the biggest finance scandal in Korean history.

“The Divine Move 2: The Wrathful” dropped down to second place, attracting 365,000 moviegoers to 1,026 screens. The film, exceeding expectations, already is drawing close a total of 2 million ticket sales in its second week — it has sold a total of 1.8 million tickets as of Sunday.

“Kim Ji Young, Born 1982,” continued to do well in theaters, drawing 153,000 people to 701 screenings. The local film, despite the harsh criticism from anti-feminists, has performed well past its break-even point of 1.6 million tickets. After the weekend, the film has sold close to 3.5 million tickets in total.

“Terminator: Dark Fate” was slowed down by new local releases and attracted about 136,000 people to 609 screenings over the weekend. Those who have seen the film have given it good reviews and say that it delivered exactly what they wanted: A series of mouth-dropping action sequences led by three female protagonists played by Linda Hamilton, Mackenzie Davis and Natalia Reyes.

Last but not least, “The Addams Family” closed the weekend selling 89,000 tickets at a total of 591 screens.

Meanwhile, anticipation for “Frozen 2,” which will be released this Thursday is palpable through numbers: The first teaser released this February set a record of views for animated movie trailers, surpassing 100 million views in the first 24 hours after its release. “Frozen” (2013) set a new milestone at local cinemas when it was released as it was the first animated film to surpass 10 million ticket sales in Korea. Walt Disney Studios guarantees more magical music, a new storyline and beautiful imagery to mark the return of sisters Elsa and Anna, much to the excitement of fans who have been waiting for five years.