Third round of talks on defense costs kicks off

Third round of talks on defense costs kicks off 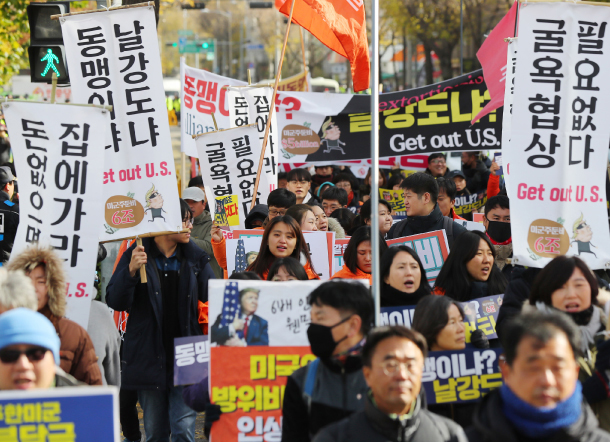 Civic groups march to protest Washington¡¯s demand for an exorbitant increase in Seoul¡¯s share of the cost of U.S. troops in front of the Korea Institute for Defense Analyses in Dongdaemun District, central Seoul, where the third round of talks to negotiate the 11th Special Measures Agreement (SMA) kicked off Monday. [YONHAP]

Korea and Washington kicked off the third round of talks to renew their defense cost-sharing agreement Monday in Seoul with the pact set to expire at the end of the year.

Korea’s chief negotiator Jeong Eun-bo, and his U.S. counterpart, James DeHart, kicked off the latest round of talks for the 11th Special Measures Agreement (SMA) which runs through Tuesday.

Washington has been pressuring Seoul to pay a drastically higher share for the stationing of 28,500 U.S. troops in Korea, with the reported figure being nearly $5 billion, five times higher than in the previous agreement.

Concerns are mounting in Seoul that the Washington alliance could become a relationship based on transactions.

DeHart arrived in Seoul Sunday and told reporters at Incheon International Airport that the “frequency” of his visits is an indication of “how important this alliance is to us,” adding, “I am very confident that with some hard work, we will get to a good agreement.”

DeHart made an unexpected visit to Seoul at the beginning of this month as senior U.S. State Department officials visited the country, followed by a series of top Pentagon officials last week.

U.S. Defense Secretary Mark Esper said last Friday during a joint press conference with his Korean counterpart in Seoul, “This is a very strong alliance we have, but Korea is a wealthy country and could and should pay more to help offset the cost of defense.”

Esper echoed the wording he used last Wednesday when speaking to reporters en route to Seoul as he described the message he will bring to Korea on burden-sharing is about how to “offset U.S. costs for forward-deployed forces,” the same message he shares with other American allies.

Washington has more commonly referred to burden-sharing as a “contribution” rather than “offset costs,” terminology seen by analysts as diverging from the past.

Esper formerly served as a lobbyist for U.S. defense contractor Raytheon and is known as an arms industry insider. His stance echoes that of U.S. President Donald Trump who has consistently demanded that allies pay up.

Seoul in turn stressed Korea’s past and future arms purchases from the United States, a point that was also raised in President Moon Jae-in’s summit with Trump on the sidelines of the United Nations General Assembly in New York in late September.

Korean Defense Minister Jeong Kyeong-doo and Esper led the 51st Republic of Korea-U.S. Security Consultative Meeting on Friday and the joint communique released after the talks described how the U.S. defense secretary “offered his appreciation for the ROK’s contributions toward ensuring a stable stationing environment for U.S. forces in Korea while emphasizing the importance of defense cost sharing.”

The two sides again “shared the understanding that future SMA contributions must be set at a fair and mutually agreeable level” and the desire to conclude the deal before the expiration of the 10th SMA on Dec. 31.

The two sides, however, have a long road ahead to narrow their differences and determine the total amount and the duration of the 11th SMA.

Since 1991, Seoul has shouldered partial costs for the stationing of U.S. troops through the SMA, usually a multi-year agreement under the Status of Forces Agreement, or SOFA. In the current one-year deal, Seoul agreed to pay 1.04 trillion won ($888.6 million), or around 8.2 percent more than what Korea spent in the previous SMA. The agreement covers the personnel costs for Korean civilians working for the U.S. Forces Korea (USFK), as well as construction and logistical support costs. However, Washington is seen to be trying to include items beyond these areas such as the deployment of strategic assets or joint military exercises.

The first round of talks for the 11th SMA took place in September and the second of last month. Previous SMA negotiations have passed their deadlines, as was the case for the 10th SMA signed in February, which causes issues such as the timely payment of the Korean civilians working for the USFK.

A new cost-sharing agreement would require parliamentary approval, and ruling party lawmakers have said they will find it difficult to ratify the deal in the National Assembly if the cost increase is too drastic. Floor leaders of ruling and opposition parties on Monday discussed ways to come up with a fair cost-sharing deal, but could not settle on a cohesive agreement. Groups of bipartisan Korean lawmakers plan to head to Washington in the coming weeks to meet with U.S. congress people and experts to discuss the issue.