Trump tweets that Kim’s time is running out

Trump tweets that Kim’s time is running out 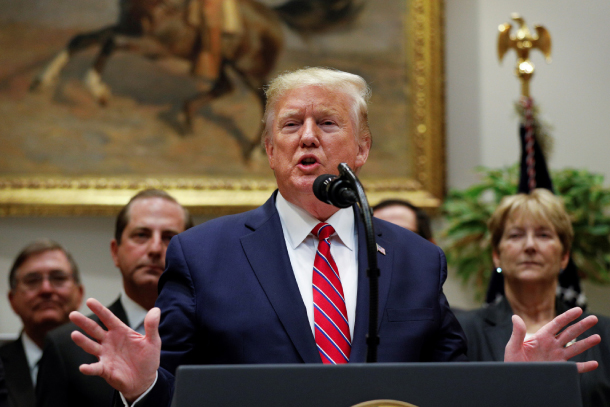 The president appeared to combine his administration’s ongoing denuclearization negotiations with North Korea with his campaign for reelection next year when he referred on Twitter to a commentary from North Korean state media on Friday calling former Vice President Joe Biden a “rabid dog” that must be “clubbed to death at once.”

Addressing Kim as “Mr. Chairman,” Trump said Biden, the Democratic frontrunner in most polls to challenge him in the 2020 presidential race, was “sleepy and very slow,” but still “somewhat better than” how he was portrayed by Pyongyang.

“But I am the only one who can get you where you have to be,” Trump told Kim in the tweet. “You should act quickly, get the deal done. See you soon!”

While apparently intended to disparage Biden while distancing himself from the North Korean commentary - which went so far as to claim the “time has come for [Biden] to depart his life” - Trump’s tweet suggests a willingness to meet Kim for a fourth time as long as some sort of agreement is reached between both sides in advance.

The North Korean Foreign Ministry’s adviser Kim Kye-gwan issued the regime’s response to Trump’s tweet on Monday, saying he interpreted it to mean the United States wanted another summit.

“Since June last year there have been three meetings between the leaders of North Korea and the United States, but relations haven’t improved while the U.S. continues to buy time while pretending to make progress,” Kim said. “We have no interest in pursuing such talks that do not benefit us.”

Adding that the North would no longer indulge Trump with events that he can claim as foreign policy achievements, Kim stressed that Washington needs to lift its hostile policy towards Pyongyang if it seeks further dialogue.

A round of denuclearization discussions in Stockholm early last month ended with the North Koreans storming out to claim the United States hadn’t budged from its position from the disastrous second Trump-Kim summit in Hanoi, Vietnam, in February.

In Hanoi, North Korea regarded U.S. demands for its full denuclearization ahead of any concessions like sanctions relief unacceptable, leading the talks to collapse.

After numerous weapons tests and fulminating public statements from its top officials, North Korea last week claimed the United States had reached out through a third country for another round of talks next month. Washington on Sunday also announced it would postpone joint air drills with Seoul scheduled for December as an act of “goodwill” toward the North to encourage it to return to the negotiating table.

According to a South Korean government source, the U.S. proposal for new talks - delivered in the name of U.S. Special Representative Stephen Biegun, Washington’s top envoy in the negotiations - was relayed to North Korea by Sweden sometime around Nov. 10.

With Stockholm acting as a mediator keeping dialogue alive, the U.S. decision to postpone its air drills raises the likelihood the two parties will return to talks in Sweden around the first week of December, given a dwindling amount of time left before a year-end deadline set by Pyongyang.

The North’s Foreign Ministry issued a statement Sunday accusing Washington of staging “another political provocation getting on our nerves” in the form of a resolution addressing human rights in North Korea “railroaded” at the United Nations General Assembly on Thursday.

“The U.S. has no intention to sincerely work with us towards the settlement of issues,” the English-language statement said.

“Therefore, we have no willingness to meet such dialogue partner.”

The statement left open the possibility of talks resuming.