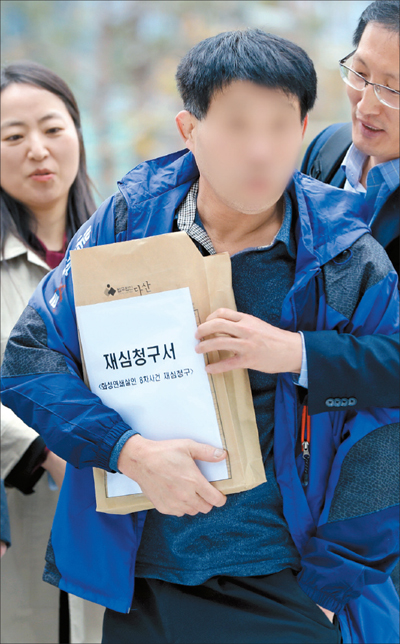 A 52-year-old man identified only by the surname Yoon, who served 20 years in jail for the 1988 murder of a woman in Hwaseong, Gyeonggi, walks to the Suwon District Court on Nov. 13 along with his defense lawyers to request a retrial of his case. The news service released this photo with his face pixelated. [NEWS1]

Police acknowledged that a copycat killer jailed for 20 years may have been innocent all along - and that a serial killer was undoubtedly responsible for the killing of a 13-year-old in 1988, bringing his victim count up to 15.

In a press briefing Friday, the Gyeonggi Nambu Provincial Police Agency said it tentatively concluded that Lee Choon-jae was the real killer of the middle school student in Hwaseong, Gyeonggi, based on his confession that he killed 11 women in that county from 1986 to 1991 and three more in Suwon, Gyeonggi, and Cheongju, North Chungcheong, in the same period.

Lee was already serving a life sentence in the Busan Penitentiary for raping and fatally strangling his ex-wife’s sister in 1994 in Cheongju.

The announcement backed up 31 years of claims of innocence by a 52-year-old man identified by the surname Yoon, who served 20 years in jail for the killing of the 13-year-old girl.

Last week, Yoon and his lawyers filed for a retrial of his case with the Suwon District Court, arguing that police at the time tortured him to extract a false confession based on faulty evidence they collected, eventually leading to his conviction in October 1988.

Yoon was the only person charged in the eighth of 11 grisly rapes and murders that took place in Hwaseong from 1986 to 1991, which became Korea’s most mysterious cold cases.

It was only in September that a new form of DNA analysis traced several unsolved murders to convicted murderer Lee.

After a series of questioning by police, Lee confessed to committing 14 other murders - including the 13-year-old.

While police were at first skeptical of Lee’s confession of the eighth murder, the convict was able to describe in vivid detail features of the crime like the location of the victim’s house and the layout of furniture in her room, as well as details about her body - specifics that only the perpetrator would have known.

On Friday, police said Lee’s confession that he entered the girl’s home barefoot and wearing socks on his hands matched records from the crime scene, where no traces of fingerprints or shoeprints had been found.

Lee’s confession contained much greater detail than Yoon’s, police said, and was different in many ways. While Yoon confessed that he strangled the girl with his bare hands, the marks left on the victim’s neck were more consistent with Lee’s claims that he wore socks on his hands.

In regard to Yoon’s allegation that his confession was extracted from him through torture, investigators said they would first need to wrap up their probe before concluding whether the investigation at the time had proceeded in a proper manner.

Police also questioned the validity of the forensic process that linked Yoon to pubic hair samples found at the scene, which was key evidence leading to his conviction.

“Among the three officers that Yoon said he remembers, one has already died,” police said. “We will strive to confirm whether there had been illegal actions performed on Yoon in the investigation process and whether he had been wrongly convicted.”