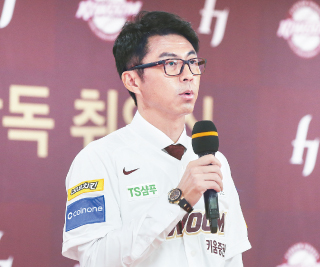 The Heroes finished the 2019 season strong, ending as runner-up at the Korean Series. But surprisingly, the club chose to part ways with former manager Jang Jung-seok and announced the appointment of Son.

Son held his inauguration ceremony at Gocheok Sky Dome in western Seoul on Monday. Below are edited excerpts.

Q. How do you feel about getting appointed as the Kiwoom Heroes manager?

A. Firstly, it’s a great honor. I feel very happy about it.

Did you have any second thoughts when you were given the offer?

Since it’s such an honorable position, I gladly accepted it when I got the offer. But although it felt great, it was also in a position with some pressure. I’m the type of person who can differentiate the things I can control and I can’t. I think about the areas I can let go of and the areas I can do well in.

Since the past is the past, I’m trying not to focus on that. I told the coaching staff that I won’t stress myself out. I believe that if we think about it together, then our club can get a step closer to what the front office or the players want.

What do you think the Heroes have to improve on? What would you like to emphasize to the team?

I believe that I’m strong in pitching, so I’m going to try to focus more on that and come up with a stronger pitching team. When I was with SK, Kiwoom was the team that our pitchers found most uncomfortable to pitch against [as it had such a strong batting lineup]. I’m trying not to break that.

We’ll be starting our end-of-year camp tomorrow [Tuesday], and I’m going to talk to each one of the players. When I was [the Heroes’ pitching coach], we used a lot of data. I consider them the best in this area. As we talk more, we’ll come up with better solutions.

I’m very close with our current coaches. Back when I was the pitching coach [for the Heroes], we used to joke with each other and grabbed a beer together. I consider communication very important.

Back when Coach Kim Ji-soo was a player, he did a great job fulfilling his role as a Heroes backup player. When I served as a pitching coach, I regularly thought that it’d be great if he became a defensive coach.

There were some troubles behind within the club when you were appointed as manager. How did you feel?

I tried not to read related articles. Just as I said, that’s an area I can’t really control. If I start thinking about things that I can’t control, then I can’t move forward. Kiwoom is a team that consists of great players showing great performance with the national team and has players with great potential. I’m trying to think more about that.

Did you talk with the Heroes’ former manager Jang Jung-seok at all?

A little after I was appointed as manager, I talked to him on the phone. He congratulated me. I suggested we grab a meal together when he’s available.

As a manager, do you have a role model?

All the managers I’ve met throughout my career as a player, when I was younger, have been great. But if I had to choose among them, I’ll probably narrow it down to two people. Trey Hillman, who emphasized staying positive, and Youm Kyoung-youb, who taught me to be prepared.

They are my biggest role models.

How are things looking with the re-signing of foreign players?

They’re going well. Both pitchers picked up more than 10 wins, and Jerry Sands is a great batter, like Darin Ruf [of the Samsung Lions]. The club is progressing well.

Do you face any pressure as the Heroes’ manager?

I’d be lying if I said I didn’t. But Hillman told me that it’s good to differentiate the things that I can control and I can’t. Pressure isn’t something I can control.

If you had to choose one player that you are the most exciting about working with, who would that be?

I’m excited about the whole pitching team because they’re good. But if I had to choose one player within the team, it would be Lee Seung-ho. When I was younger, I also got to pitch in a Korean Series game. Regardless of a win or a loss, I think that was the experience that allowed me to improve my game the most. He didn’t see the best result with the national team, but I saw that in a positive way. He didn’t try to run away from the batters with his pitches. That’s positive.

In batting, it would be Kim Woong-bin. I saw him throughout the postseason. He didn’t get much time to adjust to the club as he had just joined from the Sangmu Baseball Team, but he still played well. That’s not an easy thing to do.