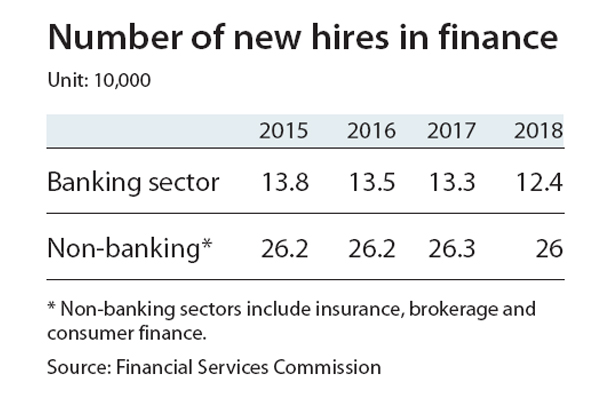 Measuring social contribution is not as easy as it seems, and that is a problem for regulators working to track job creation by banks.

The Financial Services Commission (FSC) announced in June that it will come up with an index of the “contribution” major banks make toward employment.

But the regulator admitted last week that it was not able to determine the degree of each bank’s contribution to job creation with the employment inducement coefficient, which was the indicator it had intended to use.

The employment inducement coefficient refers to the number of new jobs directly and indirectly created when a given industry produces an additional 1 billion won ($856,629) worth of output.

The Korea Institute of Finance, an institute under the regulator, advised against using the figure in assessing bank capacity for job creation since it can lead to a misleading result, according to the FSC.

“Depending on different variables, the result significantly differed, which means that the statistics could be inaccurate,” Lee se-hoon, head of the financial policy division at the FSC, said last Friday.

The regulator provided the numbers for the banking sector’s direct and indirect employment.

The plan was to look into the employment situation at 14 banks, including Shinhan, KB Kookmin, Woori, KEB Hana and Nonghyup, but the regulator refrained from announcing the hiring details of each institution.

While the FSC vowed to improve the measurement, it also acknowledged the limitations.

“The banking sector is not ideal to boost job creation,” said a participant in an FSC meeting held earlier this month.

“We need to look for other sectors to create new demand and more jobs,” the official said, suggesting the challenges from the growing use of mobile and online services.

The shift also prompted banks to reduce the number of branches and bank tellers.

“In fact, the employment issue won’t be resolved by the government or financial companies’ involvement,” Lee said.

“Therefore, job creation itself can’t directly stand as a policy objective. Rather, it should be pursued with other policies and agendas in the sector such as financial support,” he said.

The general recruitment trend in the broader finance sector showed that only asset managers added a higher number of newly employed in 2018 compared to 2015, while banks and insurance have experienced a steady decline.