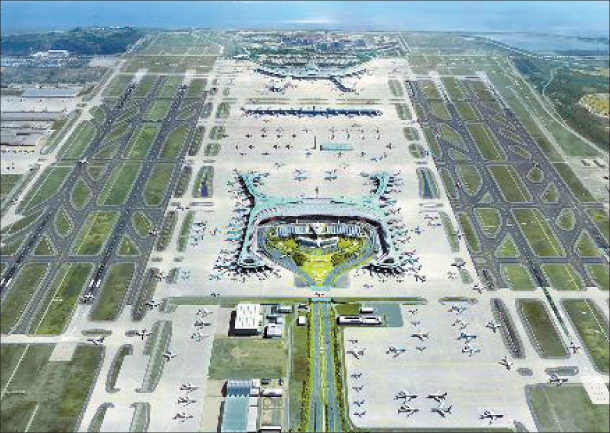 Ground was broken on the fourth phase of Incheon International Airport, with Terminal 2 being expanded and a new runway being built.

The project, which will take total capacity to 100 million passengers a year, will be completed by 2024. Current capacity is at 77 million.

Following completion of Phase 4, Incheon airport is expected to be the third-largest in the world in terms of total passenger numbers.

It will be the world’s first to have two commercial airline terminals each with a capacity of greater than 50 million.

The Incheon International Airport Corp. and the Ministry of Land, Infrastructure and Transport held a groundbreaking ceremony on Monday.

Incheon airport will be investing a total of 4.84 trillion won ($4.15 billion) in the project.

The new runway will help the airport increase the number of airplanes operating per hour from the current 90 to 107. Additionally, the road connecting Terminal 1 and Terminal 2 will be shortened from 15.3 kilometers (9.5 miles) to 13.2 kilometers.

Other upgrades include the introduction of various smart technologies, including artificial intelligence, 5G connectivity and the Internet of Things.

The project is expected to create 60,000 jobs as well as economic value added equal to 13 trillion won.

The airport will also be constructing an MRO (maintenance, repair and operation) facility on 16 million square meters (172 million square feet) of land near Terminal 2. It is expected to save 1.3 trillion won in spending overseas on MRO.

Due to lack of infrastructure, Korean airliners have commissioned maintenance and repair overseas, including in Singapore and China.

“The Incheon International Airport will not settle for the achievements it has made so far but is preparing to leap forward, becoming the world’s leading hub airport, an airport that generates new value, a smart airport that raises the convenience of its customers and a green airport that will emphasize the environment while incorporating culture and art,” said Kim Kyung-wook, vice minister of land, infrastructure and transport. “Through these five goals, we will continue to create a platform that realizes an economy centered on people through innovation and inclusion.”

Incheon International Airport is also considering the construction of a third terminal and another runway, which would raise passenger and cargo capacity.

Expansion comes at a time of high demand as budget airlines have been growing at about 20 percent a year.