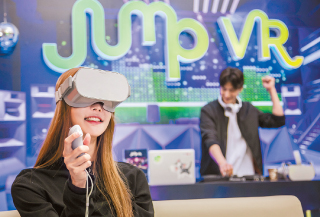 Each user is given their own, virtual living room complete with a TV to watch movies. Outside that room, players can choose to enter seven different spaces including a club, cafe, concert hall and conference room to interact and talk to other people.

SK said the version showcased Tuesday will be constantly upgraded with the ultimate goal of converting “every real-life activity into the virtual world,” including tourism and shopping.

“VR content until now has mainly been videos or single-person games,” said Jeon Jin-soo, head of SK Telecom’s 5GX business, at a press event held Tuesday in central Seoul. “Today we’re seeing the rise of social VR in which multiple users can interact as if they’re standing right next to each other.”

Jeon added that 5G plays a big role in social VR as low latency data transmission and a large bandwidth to download a massive amount of data in a short time span are a must for real-time conversations.

SK announced that it would release Virtual Social World in overseas markets next year. The United States will be one of its earliest markets, hinted Jeon. This will be SK’s first 5G-powered service launched abroad. The company also plans to release a non-VR mobile version of the app so that users can stay connected across multiple platforms.

Virtual Social World is not SK’s first shot at creating a VR space. It’s actually the result of accumulated attempts in the field including the Oksusu Social VR released last year, which enabled multiple users to watch TV in a virtual living room. SK now has more than 90 patents in AR and VR technology.

“It’s been five years since we’ve been developing social VR. The reason we were able to persist with this project is rooted in a belief, as a telecommunications operator, that VR will come to play a crucial role in the future of communication methods,” said Jeon.