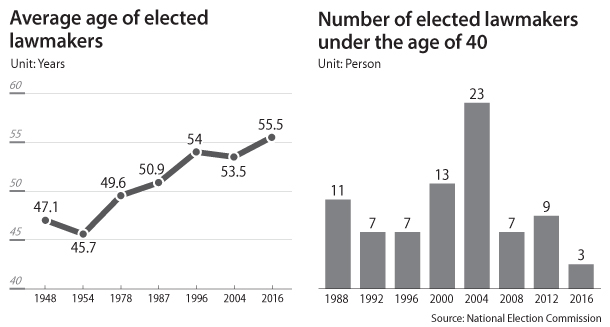 Korea’s National Assembly, known for its extremely low participation by young parliamentarians, is facing a possible generational change as political heavyweights of the ruling and opposition parties recently announced their decisions to give up their bids to run in the upcoming general elections.

Im Jong-seok, former chief of staff of President Moon Jae-in, and Rep. Kim Se-yeon, a three-term lawmaker of the Liberty Korea Party (LKP) who is heading the main opposition party’s think tank Yeouido Institute, said in two separate announcements on Sunday that they won’t run in April. Both Im and Kim started their political careers when their parties recruited young, fresh candidates. Im was elected for his first term in 2000 when he was 34, and Kim was elected for the first time in 2008 when he was 36.

Following their announcements, demands have been growing inside both the ruling Democratic Party (DP) and the opposition LKP that senior politicians must not seek reelection in order to create vacancies for new faces. “The wind of generational change is blowing in Yeouido,” Sohn Hak-kyu, head of the Bareunmirae Party, said Monday.

Inside the DP, pressure is mounting for the so-called 386 group, who were in their 30s in the 1990s, were college students and politically active during the pro-democracy movement in the 1980s and were born in 1960s, to retire from politics.

First and second-term lawmakers of the LKP said senior politicians who have won more than three terms in the areas of Yeongnam, which are Busan, Daegu and South and North Gyeongsang provinces, must give up their districts.

The National Assembly is one of the most aged legislatures in the world. The Inter-Parliamentary Union conducted a survey last year on young parliamentarians worldwide. Its 150 member countries were ranked according to the share of lawmakers aged under 45, and Korea placed 143rd with a mere 6.33 percent. Thirteen countries had legislatures where more than half of their members were under 45.

While the 386 generation politicians steadily entered the National Assembly, the succeeding generations failed to do so. In the 1996 general election, Kim Min-seok, a former student association president of Seoul National University, was elected as the youngest member at the age of 31.

In the next election, Im was elected as the youngest member.

In the 2004 general election, the 386 politicians entered the National Assembly en masse. Over 10 candidates, including Reps. Woo Sang-ho and Lee In-young, were elected as first-term lawmakers of Uri Party, a predecessor of the DP.

The Grand National Party, the predecessor of the LKP, also recruited young, conservative politicians, and three successfully won seats in the same election. In 2004, 23 lawmakers in their 30s were elected - the highest youth participation ever.

“In the past, Korea had a culture of so-called ‘boss politics,’ where political heavyweights groom their successors,” said Shin Yul, political science professor of Myongji University. “And the 386 generation made the best use out of the system and started their political careers. Although they benefited the most from the system, they stopped inheriting the culture to groom the next generations.”