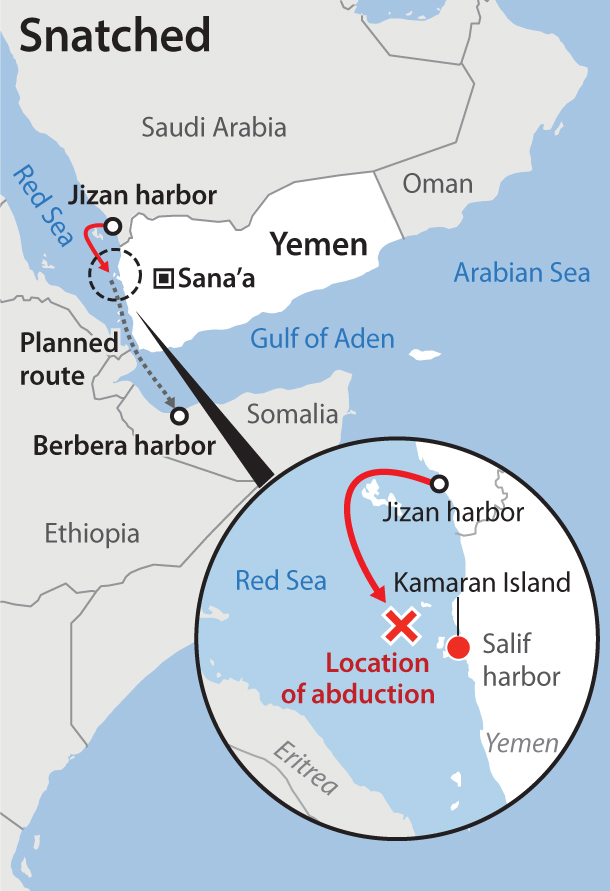 Houthi rebels seized three boats off the western coast of Yemen Monday, prompting Seoul to send an anti-piracy maritime unit stationed in nearby Oman to try to save the crews, including two Koreans.

A Korean sand-dredging ship, called the G-16, and two tugboats towing the dredger - one Korean and one Saudi Arabian - were seized around 15 miles off the Yemeni island of Kamaran at around 3:50 a.m. on Monday, according to Korea’s Ministry of Foreign Affairs on Tuesday.

A total of 16 people of various nationalities were on the vessels, the ministry said, including two Korean nationals, both in their 60s. One of the Koreans, the captain of the G-16, relayed an emergency message to his shipping company, Woongjin Development Co., at 7:24 a.m. on Monday saying pirates had taken over the ships.

Korea’s Foreign Ministry contacted the Houthi movement in Yemen, which confirmed its militants had seized the three ships and taken them to Salif Port in Hodeidah, Yemen. According to Reuters, Mohammed Ali al-Houthi, a leader of the Houthi movement in Yemen, said the captured crew are being treated well and are in good health, adding that the Houthi forces are inspecting the ships to determine whether they belong to “countries of aggression” or Korea and that the ships and crew would be freed if they belonged to Korea. This implied that the tug boat registered in Saudi Arabia could continue to be held.

The Saudi-led coalition fighting the Iran-aligned Houthis released a statement Monday confirming the Korean dredger - which it identified as an oil rig - and two tugs had been seized, calling the seizures a “terrorist operation” that threatened the freedom of navigation and international trade.

Yemen’s prime minister, Maeen Abdulmalik Saeed, also publicly announced the capture of the Korean ships on his Twitter account, saying it represented a “dangerous escalation” of hostilities in the country.

The ships departed from Saudi Arabia’s Jizan Harbor on the Red Sea and were heading to the Gulf of Aden en route to their destination, the Somalian Port of Berbera. The dredger had been leased by an Emirati company from Woongjin to perform dredging work on behalf of a Somalian company, though Seoul forbids its citizens from visiting Somalia due to its instability.

In response to the seizures, Korea deployed the destroyer ROKS Gang Gam-chan under its Cheonghae anti-piracy unit from the Omani capital of Muscat at 11:17 a.m. on Monday and sent it to the site of the abductions.

The Cheonghae unit, which protects commercial vessels from piracy near the coast of Somalia as part of the multinational Combined Task Force 151, was ordered to “respond flexibly to the situation,” according to a Foreign Ministry official. This would not involve a military operation, he said.

Seoul’s Deputy Defense Minister Park Jae-min said Tuesday the destroyer had not yet arrived in Yemen and that the government was continuing diplomatic contact with the Houthis to free the prisoners.

While seizures of foreign vessels by Houthi militants have occurred in the past, the abduction of the Korean boats this week comes at a sensitive time in Yemen. Saudi Arabia is reportedly in talks with Houthi representatives on a peace settlement to end the country’s four-year civil war.

With the country divided between the Houthis controlling the capital of Sana’a and the Saudi-backed government based in Aden, Yemen, spillovers from the conflict include a mass outflow of refugees to countries around the world, including Korea, where public controversy raged earlier this year about accepting around 500 Yemeni refugees who sought asylum on Jeju Island.