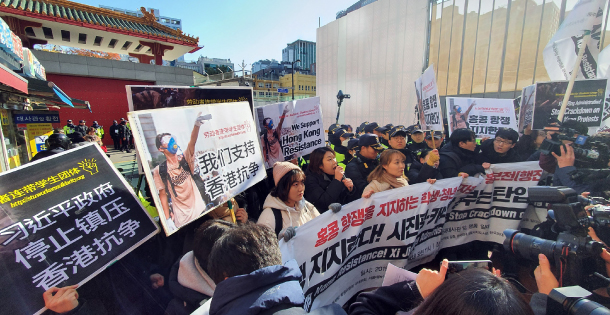 Korean college students call on Beijing to stop their crackdown on Hong Kong protesters Tuesday in front of the Chinese Embassy in Myeong-dong, central Seoul. The group denounced the Chinese Embassy’s statement from last week, which appeared to support the tearing down of pro-Hong Kong posters and banners that Korean students had hung on their school campuses. [YONHAP]

A coalition of six groups composed of mostly Korean university students stood nearly 30 meters (98 feet) away from the Chinese Embassy on Tuesday morning and read out a joint statement calling on Beijing to stop its “hard-line crackdown” on “peaceful Hong Kong protesters.”

The students also took issue with a formal statement that the Chinese Embassy released last Friday, accusing the embassy and the Chinese government of “denigrating” the Hong Kong movement by backing Chinese students in Korea who tore down pro-Hong Kong banners and posters hung by Korean students on school campuses.

Tension between Korean and Chinese students has been escalating recently across some universities in Seoul as more Koreans are starting to voice their support for the Hong Kong protests, inviting ire from Chinese nationals who urge them not to interfere in other countries’ business.

Korean students at several schools have reported cases of seeing their pro-Hong Kong posters and banners getting torn down by Chinese students. As local media caught on to the dispute, the Chinese Embassy released a rare statement last Friday on its official website, saying it was “regretful” that Korean and Chinese students were engaged in an “emotional confrontation.”

The statement, released in the name of an unidentified spokesperson for the Chinese mission, said it was “a definite and reasonable” thing for Chinese students in Korea to “express their anger and opposition” to any words and actions that harm Chinese authority and distort facts, in what appeared to be a show of support for Chinese students tearing down the Hong Kong posters.

The Korean students who protested in front of the Chinese Embassy Tuesday said they weren’t against China, but stressed that Beijing ought to cease its “bloody” crackdowns.

Some 50 Korean police officers were dispatched to the scene and a few urged the students to disperse, saying they were rallying at a place where protesting is illegal. The students didn’t budge and the rally went on for about 30 minutes from 11 a.m.

The students then marched down the streets of Myeong-dong for some 30 more minutes, chanting “We support the Hong Kong resistance,” “Support Hong Kong,” “We condemn [Chinese President] Xi Jinping” and “Stop the hard-line crackdowns!”

Some Chinese onlookers heckled, but no physical clashes occurred.

“We’re not boycotting Chinese people,” said Han Soo-jin, a student of Korea University, who joined the protest as a member of the Workers’ Solidarity labor organization.

“There are even some Chinese students who support the [Hong Kong] protests.”

Han went on, “We must fight against the hard-line crackdown.”