51 percent of ultrafine dust in Korea is made here

51 percent of ultrafine dust in Korea is made here 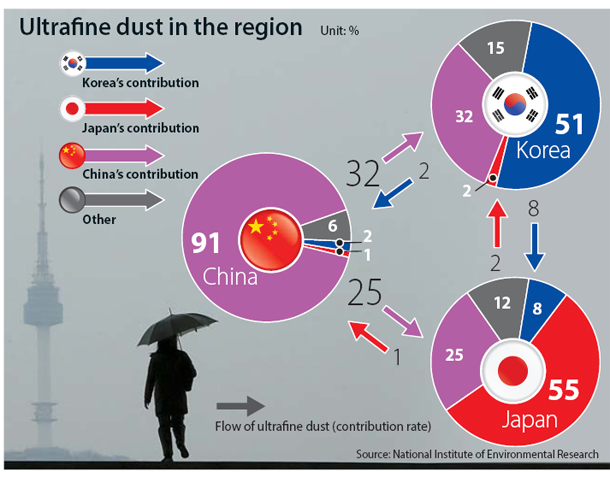 Around 32 percent of ultrafine dust in Korea can be attributed to China, a piece of joint research by Korea, China and Japan showed Wednesday, as fine dust pollution continues to be a regional environmental headache.

An average of 51.2 percent of ultrafine dust in Korea comes from domestic factors and 31.2 percent and 2 percent, respectively, stem from China and Japan, according to a summary of the joint study released by Korea’s National Institute of Environmental Research.

The remaining 15.6 percent were due to other factors.

The study, the first of its kind, was conducted in major cities of the three countries, including Korea’s Seoul, Daejeon and Busan.

The report showed China, Korea and Japan contributed 91 percent, 51.2 percent and 55.4 percent, respectively, to their own pollution, it added.

It said Korea was the cause of 8.2 percent of the ultrafine dust in major Japanese cities and of 1.9 percent in large Chinese cities.

In the December-March period, when the level of fine dust is dense, China’s contribution to Korea’s air pollution tends to sharply increase.

A separate study by the institute showed that 70 percent of the fine dust in Korea came from China during the high density period.

The findings are part of the Joint Research Project for Long-range Transboundary Air Pollutants in Northeast Asia, a regional project the three countries launched in 1996 to “study the state of air quality, the influence of neighboring countries and the policy-making of each country to improve air quality.”

The latest report is based on the fourth stage of the study, undertaken between 2013 and 2017, focusing on the contribution rates of the three countries regarding PM2.5 levels of ultrafine dust, or the amount of particles smaller than 2.5 micrometers in diameter.

On a positive note, researchers noted that the annual average concentrations of air pollutants, including fine dust and ultrafine dust, have declined at the monitoring sites.

They stressed, however, that further efforts to cut emissions are important in improving air quality.

Fine dust is a potential cause of respiratory diseases and cancer. It is more likely to penetrate deeper into the lungs, while ultrafine particles can be absorbed directly into the bloodstream, posing serious health risks.