Brave dogs step up to make blood donations: Pet owners come together to create a safe system to help local canines in need

Brave dogs step up to make blood donations: Pet owners come together to create a safe system to help local canines in need 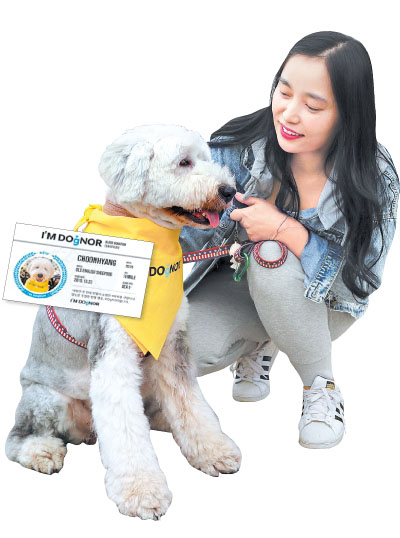 Above: Kim Yeon-ok participates in a dog blood donation campaign on Oct. 23 with her 4-year-old Old English Sheepdog Choonhyangyi, who wears a canary yellow scarf given as a souvenir for donors. Far left: The certificate issued to blood donors. [SHIN IN-SEOP]

Kim Yeon-ok, a 40-year-old housewife living in Gwangju, Gyeonggi, drove miles to be part of a blood donation campaign on Oct. 23 along with a special companion named Choonhyangyi, a 4-year-old Old English Sheepdog.

Kim’s destination was the Deokpyeong highway rest stop located near the Yeongdong Expressway, the venue for the third dog blood donation event held by Hyundai Motor.

The local car manufacturer initiated the campaign, in which it encourages dog owners to donate the blood of their furry friends. 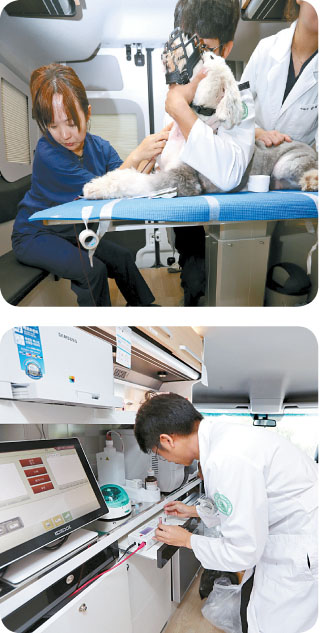 “My 14-year-old dog bled a lot when it underwent surgery and it eventually received a blood transfusion last winter. Before that, I didn’t really know much about dogs that are raised only for blood,” said Kim.

“I felt so sorry to hear that they spend their whole lives in cages and are raised for blood until the day they die. Just as my dog is precious to me, other creatures are precious, too. If there isn’t enough blood, we can help each other. So I signed up for this event.”

There are about 10 million pets living in Korea. So, it comes as no surprise that there has been a surge in need for dog blood in case of emergencies, but the supply fails to meet the demand mainly because the blood comes from dogs that are raised for the purpose of making blood reserves.

So the voluntarily campaign that was kicked off a year ago by a group of dog owners has proven meaningful.

Gang Bu-seong is one of the pet owners who started the campaign in October 2018. He eventually created an organization called the Korean Canine Blood Donor Association (Kcbda).

A Solati by Hyundai Motor was remodeled into a special van where dogs can donate blood. [HYUNDAI MOTOR]

“I launched my own podcast in 2016. On a show in July 2017, I mentioned that there are dogs raised for their blood. [After that episode aired] some of my listeners and I got together at the Veterinary Medical Teaching Hospital of Seoul National University and donated blood from our dogs. That year, 20 large dogs took part. After that, we began to sign deals with other vet clinics and have donated blood since then.”

Now the association is in partnership with vet clinics across the nation.

“Desperate pet owners give us calls and ask where they should go for blood. Then we tell them where to go. It’s like we’re doing a secret operation.

“But it is a hassle for the dog owners to drive to get blood packs from clinics. In addition, most of the clinics [where donated blood is available] are located in Seoul and Gyeonggi, so I thought it would be great if we have a dedicated car. Coincidentally, Hyundai Motor was keeping an eye on us, and that’s how we got connected [with Hyundai Motor.]”

The company learned about the situation from the Konkuk University Veterinary Medical Teaching Hospital, as well as from the Kcbda when it renovated its Solati, a van that can accommodate up to 15 people.

The inside of the van was divided into two sections: one is where the blood samples are analyzed, while the other is a space where blood can be drawn. The height of the blood donor bed is adjustable to make the process as easy as possible.

It took 60 million won ($51,000) to renovate the inside of the van and another 90 million won was used for purchasing medical supplies.

With the tagline “One blood donation saves up to four lives,” an official webpage to encourage the dog blood donation was created by Hyundai Motor, and four video clips were produced for YouTube and Facebook.

The auto manufacturer also coined the word “dognor,” combing the words dog and donor. Each dognor gets a canary yellow scarf and a vest as souvenirs.

The van is currently on a nationwide tour, and it plans to make stopovers in 11 places.

Lee Chul-min from Hyundai Motor’s domestic marketing team said, “Ever since [the campaign videos] were uploaded to YouTube on Sept. 23, about 47 percent of viewers watched the whole clip from the beginning until the end. It’s quite a lot compared to the average video view rate of 27 percent.

“In addition, the 10,000 emojis [distributed via] Kakao Talk [for promotional purposes] were sold out in three days. The feedback is really good. The campaign also sheds light on the fact that large canines are not wild and scary,” Lee added.

Not all dogs are eligible for the blood donation, though. Candidates should have been given their general vaccines, including those that prevent heart worm and internal and external parasites. The dogs should be, at least, two years old and weigh over 25 kilograms (55 pounds).

People interested in the campaign should visit www.iamdognor.com and fill out detailed information about their pets, including their medical background and date of birth. If their dog qualifies, owners will be informed by telephone.

Reservations are a must for blood donation because the van is only able to accommodate one dog at a time. Each procedure takes an average of two hours, and up to four dogs can be tested per day.

On Oct. 23, Kim, the owner of Choonhyangyi, signed an agreement informing her of all the medical procedures that will be applied to her pet.

Choonhyangyi’s blood pressure, heart rate and temperature were all taken before they began drawing blood.

After that, the medical staff trimmed the fur around the dog’s neck and dabbed some topical anesthetic creams.

The dog was waiting for the next round while a blood sample was being analyzed to see whether it was suitable for donation.

“We’ve had regular medical checkups every six months, but I’m little nervous if my dog has some [medical] problems. We couldn’t donate blood the other day after we found that the blood was infected with a heartworm,” said Kim.

Han Hyun-jung, a professor in the department of veterinary emergency and critical care at the Konkuk University Veterinary Medical Teaching Hospital, was in charge of collecting blood.

“Ethical issues regarding dogs raised only for blood have become better known, but still blood is in short supply. There are many volunteer groups that donate blood overseas, but that is just beginning to happen in Korea,” said Han.

“Depending on their weight, the amount of blood that can be taken out varies. For a dog that weighs about 25 kilograms, we usually collect about 300 milliliters (0.63 pints) of blood. After the first rounds of blood and infection tests, we do a second round of tests. If the blood turns out to be positive in the second round, the blood can’t be used,” she added.

A total of 80 milliliters of blood was taken from Choonhyangyi that day. Han said, “With this blood, we can save a small dog.”

After the blood donation was completed, Choonhyangyi received souvenirs such as the vest and scarf along with freebies sponsored by Bayer Korea. Their name was also listed in Kcbda’s Hall of Fame.

“We saw a dog that was suffering from chronic anemia,” said Gang who leads the Kcbda. “It used to receive blood from dogs [raised for blood transfusion] but after it received blood from one of our [volunteer] dogs, it improved a lot and didn’t need any more blood transfusions.

“Pet owners who have small- and medium-sized dogs support us by sending donations instead. We used to have only either golden retrievers or Bernese mountain dogs, but we see more varied breeds these days such as German shepherds and Dobermans. We see this as a sign that the campaign is gaining a footing.”

Gang wants the campaign to be accepted as a natural part of dog owners’ yearly rituals.

“I suggest pet owners to donate blood on the day their dogs get yearly medical checkups. Blood is something that can’t be made at factories. And every dog deserves to live a happy life.”

The dog blood donation campaign will take place until the end of this year. The next one will be held at Munam Ecological Park in Cheongju, North Chungcheong, on Nov. 24, followed by Namsun Park in Daejeon on Dec. 4; Jeonju World Cup Stadium in Jeonju, North Jeolla, on Dec. 8; APEC Naru Park in Busan on Dec. 18, 22; Daegu City Hall Annex in Daegu on Dec. 29.