Korea has not been spared from “retail-ageddon,” the global phenomenon where brick-and-mortar establishments are going out of business because of the loss of footfalls due to online competition, but department stores seem to be the exception, as they redouble their efforts to get consumers through the door.

The strong results came despite a fall in sales after the closure of the outlet at Incheon International Airport.

The results, with both majors reporting double-digit profit growth, beat expectations and surprised the market.

Department stores are crediting their “customer reception strategy,” whereby the priority has shifted from pushing customers to buy to welcoming them to the establishment. The strategy was adopted as a defense against the aggressive online competitors. 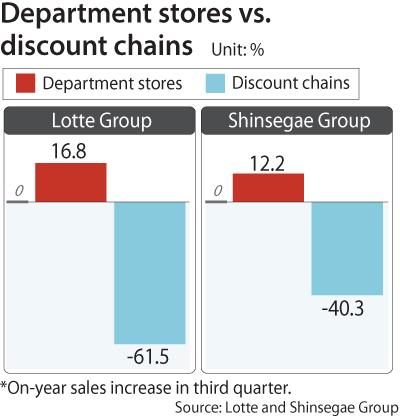 Now, department stores have many spaces that have nothing directly to do with the selling of products, such as art galleries and theme parks.

Shinsegae’s Centum City branch in Busan allocated 30 percent of its floor space for the customers’ experience. This includes a movie theater, a book store and a place where children can learn about different jobs.

The strategy seems to be working. Customers stay around the Centum City branch for 5 hours on average, which is much longer than the 2.7 hours average at other branches.

Lotte Department Store’s Avenuel main branch opened its ninth floor outdoor terrace to the public and transformed it into a space for rest and leisure. This is part of a strategy to equip every branch with a trademark space where customers are more inclined stick around.

Lotte Department Store’s Gimpo International Airport branch held “Jurassic World: The Exhibition” and attracted 100,000 visitors just in two months. According to the department store, first-time visitors accounted for 67.7 percent of total visitors in the two-month period, which is 25 percent higher than other branches.

With the opening of the Conran Shop, the British premium home ware and furniture retailer, in Gangnam District, southern Seoul, last Friday, Lotte Department Store expects to attract customers by exhibiting sofas and tables costing tens of millions of won.

While luxury items do not generate high profits, the displaying of these high-end items does attract customers.

“The strategy of attracting customers by creating a place for experience and luxury goods coincided with the current trend of the polarization of consumption, leading to a recovery in sales,” said Seo Yong-gu, a business management professor at Sookmyung Women’s University.

Big discount chains are not doing so well.

The low-price strategy has its limits. Customers only buying cheap items cannot contribute much to improving profitability.

“Big discount chains must rethink the core values only they can offer to customers offline and come up with different strategies.”