Hanjin Group will narrow its focus to the air transportation business and consider removing any affiliate outside the industry, according to the Chairman Cho Won-tae on Tuesday.

Cho on Tuesday told reporters in New York City that he is not interested in anything other than the air transportation business. 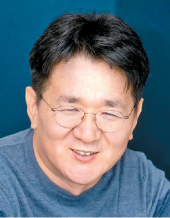 Cho explained he hasn’t thought specifically about which businesses may be subjected to restructuring but said that “non-profitable businesses have to be thrown away.”

Cho went to the United States to receive the General James A. Van Fleet Award from The Korea Society on behalf of his late father Cho Yang-ho, the former chairman of Hanjin Group. Hanjin Kal, a holding unit of Hanjin Group, controls its key affiliates including Korean Air.

Cho said the airline market in Korea is overheated.

“It doesn’t make sense that there are nine domestic airlines. There are nine airlines in the United States. Considering that nine operators are fighting against each other in a small market, the long-term projection [of the airline industry in Korea] can’t be good.”

Talking about rival Asiana Airlines, which is currently up for sale, Cho said, “The crowded market derived from the increased airline operators is seen to have affected the challenges faced by Asiana Airlines.”

Kumho Industrial has put its 31.05 percent stake in Asiana Airlines up for sale under pressure from creditors. The consortium of HDC Hyundai Development and Mirae Asset Daewoo has been confirmed as the preferred bidder.

Cho also said Korean Air is looking for another joint venture. Korean Air formed a joint venture with Delta Air Lines last year to work together on trans-Pacific routes, offering flights to more than 290 destinations in the United States and 80 in Asia.

“If possible, [we’re] looking for [another] joint venture but are wary due to the domestic regulatory limit.” Cho added, “Even if it isn’t a complete joint venture, [Korean Air] believes collaboration is an option and is looking for it.”

Cho said he expects the economy next year to be very gloomy and explained that the U.S.-China trade war and the conflict between Korea and Japan will not improve that easily.

This could suggest the sluggish performance of Korean Air may continue. Last week, Korean Air reported its on-year operating income in the third quarter dipped 70 percent to 117.9 billion won ($106 million). It said the weak global economy and trade conflicts around the world attributed to the performance.