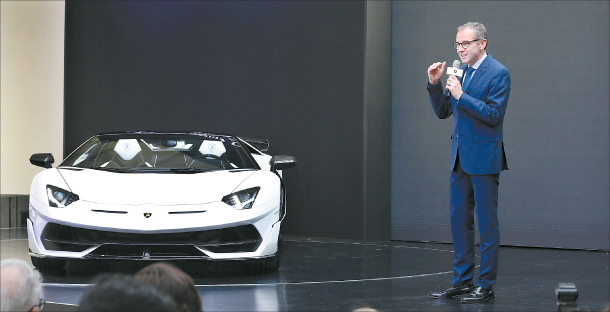 Automobili Lamborghini is having its best year ever in Korea, with sales up more than tenfold from 2018 as the Italian maker of super-high-end vehicles does well selling SUVs.

A number of other luxury car brands are also thriving as many wealthy Koreans are prospering despite the overall economic difficulties in the country.

At the Lamborghini Day Seoul held Wednesday in Jung District, central Seoul, the Bologna, Italy-based company said 130 of its vehicles were purchased in Korea so far this year, up from 11 in 2018.

Stefano Domenicali, chairman and CEO of Automobili Lamborghini, attended the event for the first time and introduced Aventador SVJ Roadster to the local market.

“Automobili Lamborghini is enjoying the most successful year in its history this year from high sales achievements in the global market,” Domenicali said during the event, adding he expects the total sales for this year to reach 160.

“Korea is a fast growing market, so the country is a very important market for us. Lamborghini will work to provide everything up to Korean customers’ expectations.”

Lamborghini, which is owned by Volkswagen, is one of several foreign luxury brands experiencing success in Korea. According to the Korea Automobile Importers & Distributors Association (Kaida), the total sales of imported vehicles in the country between January and October this year dropped 12.2 percent on year to 206,229 units.

But during the same period, Porsche, Rolls-Royce and Lamborghini, the quintessential super-luxury brands, recorded double-digit sales growth in Korea.

Through October, BMW’s Rolls-Royce sold 140 vehicles, up 44.3 percent from 97 units posted a year earlier. Volkswagen-owned Porsche recorded total sales of 3,351 vehicles from January to October, up 10.3 percent from the same period a year earlier. Ferrari, which doesn’t disclose its sales numbers in Korea, may have sold more than 100 vehicles in the country so far this year.

“As the economy worsens, the rich become richer and the poor become poorer, so the demand for extremely expensive luxury cars is destined to rise even though the overall demand for cars falls,” said Kim Pil-soo, an automotive engineering professor at Daelim University. “This trend will likely continue considering the economy will not recover anytime soon.”

Not all high-end brands are doing well. Bentley, the third most expensive car by average price of its models in Korea (after Rolls-Royce and Lamborghini), sold 73 units this year so far, down 66 percent from the 215 units from January to October last year.

Other imports are also struggling. Volkswagen sales in Korea dropped 70.1 percent on year to 3,682 units, while sales have dropped for Japanese automakers as Koreans avoid Japanese goods due to tensions related to disagreements over wartime compensation.