Use of chore apps is up threefold since 2017

Use of chore apps is up threefold since 2017 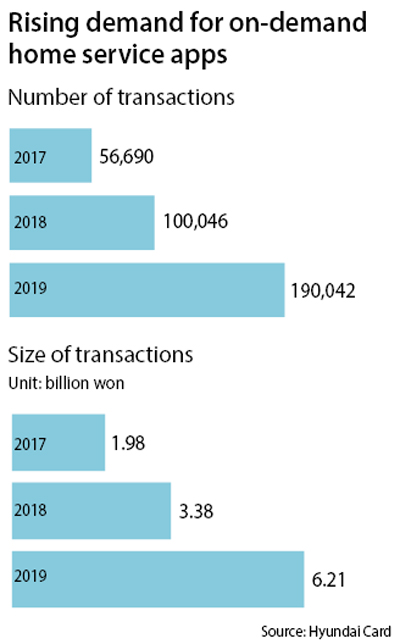 More people pick up a handset when they need to get household chores done as the there’s-an-app-for-that attitude takes hold.

Koreans in their 30s are the most likely to rush to their mobile phones, but older people are quickly catching up, according to data provided by Hyundai Card on Wednesday.

The card company sifted through transactions made on home service apps dealing with cleaning, laundry, cooking and child care between 2017 and October 2019 and polled 1,000 users across different age groups.

Of the payments, half came from people in their 30s, but exponential growth was reported in older age groups, where transactions grew fourfold and the transaction value was up 381 percent.

The cooking category was especially active, with totals jumping almost tenfold to 980.9 million won this year through October compared to 99.7 million won in the same period in 2017. That was followed by child care solution providers.

The numbers are in line with the growing market size of on-demand home services in Korea.

Statistics Korea estimates the market size was 7.5 trillion won in 2017, a figure which has doubled every year since.

The card issuer added that most of the users cited saving time as the primary reason for using the service.

“As we look into the trends of housework app transactions, which show steep growth over the past three years, it seems that many people are interested in trying the service,” a spokesperson at Hyundai Card said.

“The market size still remains relatively small, but it has the potential for further growth since its use is appealing to users across different age groups.”